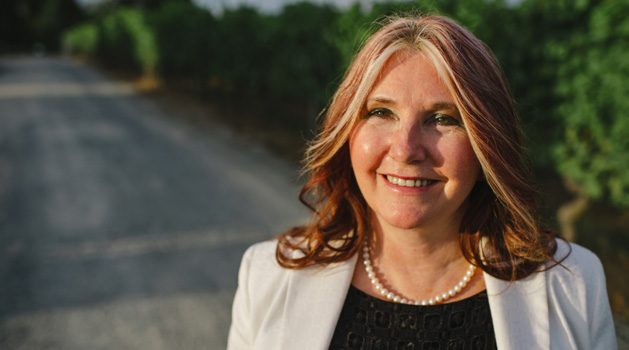 Patti MacAhonic’s life has taken some unexpected turns. Married young and widowed young, she was inspired into activism by injustices she encountered after her husband’s death following a severe workplace injury.

MacAhonic (BA Ad Ed ’02), the 2014 winner of the Distinguished Alumni Award at the University of the Fraser Valley, is currently executive director at Ann Davis Transition Society in Chilliwack.

She received her award from UFV Alumni Association chair Justin P. Goodrich at the UFV Giving Thanks donor and alumni appreciation event on Oct. 8.

Macahonic has applied her skills and talents in many volunteer and paid roles throughout her life.

After experiencing the frustration of being a widow dealing with bureaucracy, she learned about lobbying and legislative reform first-hand as she worked to change laws and practices surrounding workplace injuries and fatalities, starting soon after being widowed in 1988.

“I decided I needed to change the system with regards to workplace injuries and fatalities and their effect on the families left behind,” she recalls. “As I worked toward this, I felt like I was being viewed as a symbol, and nobody was doing anything substantial. I thought maybe if I had letters behind my name, people would listen to me more and I would become more credible to decision makers.”

She enrolled in the Social Services diploma program in the late 1990s at what was then the University College of the Fraser Valley (now UFV), and focused her research projects on her main area of interest.

“One of my term papers was on the pension needs of married, widowed, and divorced women.”

After her diploma, MacAhonic decided to continue into the Bachelor of Adult Education degree, a program designed for people working with adult learners. She earned her BA Ad Ed degree in 2002, and went on to earn a Master of Business Administration in 2008 from Royal Roads University.

“The Adult Ed program gave me a place to explore my interests. It was full of really interesting learning moments. I found out that a lot of the things I had been doing in my career had theoretical underpinnings to them. Studying the theory helped me give language to things that I was already doing. The Adult Education program is a real gem and it isn’t recognized as much as it should be.”

“The program really made me stretch experientially. I am not an artist but for one project I ended up creating a piece where stick people were escaping from a garbage bag – symbolic of leaving the past behind.”

MacAhonic’s early working life had included stints working in mining and logging camps and as a night club manager. While still enrolled at UFV, she worked teaching in a variety of adult learner programs, mostly focusing on the labour market, employment skills, and career preparation.

She has also been executive director of the BC Wildlife Federation (and was the first woman in Canada to lead a provincial fish and game organization), the Chilliwack Chamber of Commerce, and the BC Brain Injury Association. She was a candidate for the New Democratic Party for the Chilliwack riding in the 2013 provincial election.

MacAhonic’s successes have reaped public praise, media and peer recognition, and thanks and appreciation from those she has helped through her lobbying efforts. She won the opportunity to attend the prestigious Round Table conference with the Dalai Lama when he visited Vancouver in April 2004 and was further recruited to assist in organizing the Unsung Heroes of Compassion, a similar global event in San Francisco in 2005.

In her work with the BC Wildlife Federation, she established groundbreaking joint sessions of First Nations and recreational fisheries for peace on the river. MacAhonic led the organization in a diverse portfolio of resource, water, fish and wildlife issues both provincially and nationally.

“People who have been affected by workplace injury have the passion and the drive to effect change and really understand the meat of the issue from personal experience, but they are not always taken seriously. Academics studying the field have knowledge and expertise, but they don’t ‘get it’ the way someone who has lived it does. With my life experience (both my late husband and my son experienced workplace brain injury) and my education, during which I focused on this issue as much as possible, I am the glue that enables the two to work together to advocate for change.”

She is currently involved in a $13-million study on workplace injury and disability financed by the Research Council of Canada.

When not working or doing volunteer lobbying work, she enjoys outdoor pursuits and spending time with her husband, children, and grandchildren.