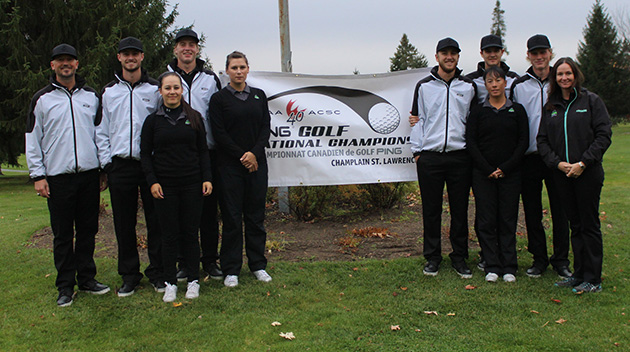 The University of the Fraser Valley golf teams had dreams of making a comeback on the final day of the PING CCAA Golf national championships, but Mother Nature had other plans.

The third and final round of the tournament was cancelled due to inclement weather at Club de Golf Lorette in Quebec City, meaning that the standings after Thursday’s Round 2 would stand as the official results.

That put both Cascades teams on the podium, with the women winning silver and the men taking bronze. Jen Woods and Connor O’Dell were named All-Canadians, while Bertram won the CCAA coach of the year award.

It’s the second straight year that both UFV golf squads have medalled at nationals – in 2013, they swept the gold medals.

“It’s really disappointing not to have the opportunity to go out and play, given how close we were to winning,” Cascades head coach Chris Bertram said. “We’ve all been in a bit of shock.”

Collectively, the UFV women were at +31, nine strokes back of the Champlain St. Lawrence Lions, the tournament host squad.

The UFV men finished at +7 overall, trailing the Holland College Hurricanes (+1) and the Camosun Chargers (+4).

“Getting on the podium at nationals is a really great accomplishment,” Bertram said. “It’s a nice award for our hard work, and I’m really proud of how the players played all week.”

The UFV golf program made an impressive haul at the Canadian Colleges Athletic Association (CCAA) awards banquet on Tuesday evening in Quebec City.

On the eve of the PING CCAA golf national championships – which both the Cascades men’s and women’s squads will be participating in – UFV’s Jen Woods, Connor O’Dell and Chris Bertram were honoured by the national body.

Woods and O’Dell were named All-Canadians, while Bertram won the CCAA coach of the year award.

Woods, a third-year golfer from Kelowna, was celebrated for a 2014 season which saw her win the PacWest conference’s individual title by 10 strokes, highlighted by a victory at the season-ending UBC Okanagan tournament. She helped the Cascades women successfully defend their overall PacWest title, finishing a collective 26 strokes ahead of UBC-O.

“She’s the inspirational leader,” Bertram said of Woods. “In terms of her ability to get it done on the course, she’s it for us. She’s the biggest piece of the puzzle.”

O’Dell, a third-year athlete from Maple Ridge, finished second in the PacWest’s individual men’s standings and won the Kwantlen tournament. He also led the Cascades men to their third straight conference title – they ended up 13 strokes ahead of the Camosun Chargers.

“Connor has not only been UFV’s highest-ranked golfer, he’s also been a terrific veteran leader,” Bertram said.

The 2014 season was a busy one for Bertram – he was a member of the coaching staff for Team Canada’s women’s team at the World University Golf Championships in Switzerland, and is serving as interim athletic director at UFV. The 2015 season promises to be just as eventful, as the Cascades host the CCAA national championships.

“Chris has great vision, dedication and an unwavering love of varsity golf,” said CCAA golf convenor Albert Roche. “He is a class act, illustrating that nice guys can finish first.

“Chris has been the driving force behind last year’s national successes as a coach at UFV and continues in his leadership role, stepping forward to secure the bid to host golf nationals in 2015.”