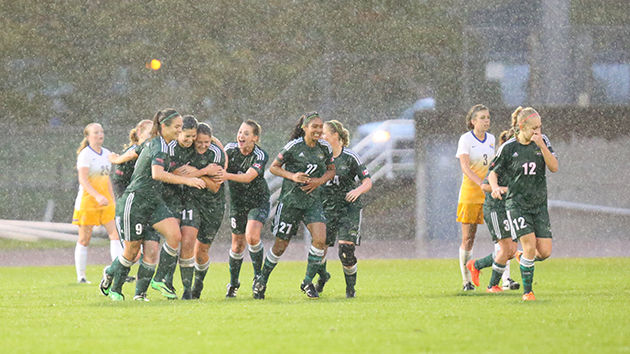 On a soggy evening in B.C.’s capital city, Carley Radomski and the University of the Fraser Valley women’s soccer team found enough traction to engineer a thrilling playoff upset.

Playing under a steady downpour at the University of Victoria’s Centennial Stadium, the Cascades came through with a gritty 3-0 road victory over the host Vikes in the Canada West quarter-finals.

UVic, the No. 5-ranked team in the nation, saw its season come to an end.

“Under the conditions we played in today, it comes down to heart and requiring that next level of desire,” Cascades head coach Rob Giesbrecht said.

“One of our culture statements is, ‘Whatever it takes,’ and today wasn’t a day for pretty football. Today was, pull your sleeves up and get after it. And I think we did that.”

The Cascades (7-2-3 coming in) had finished third in the Pacific Division, just behind the Vikes (8-1-3), but had reason for optimism after battling UVic to a pair of 1-1 draws in their regular-season matches.

Victoria got off to a great start, earning a pair of corner kicks in the early minutes, but they weren’t able to break the ice. UFV defender Dayle Jeras picked up a yellow card in the ninth minute after a sliding tackle, and keeper Kayla Klim was tested a couple times from distance.

Slowly but surely, the Cascades grew more dangerous going forward. They had something cooking on the counterattack on a couple of occasions, but weren’t able to connect on that final pass for a truly golden scoring chance.

In the 35th minute, they broke through. Tristan Corneil’s corner kick fell to midfielder Bhullar in a goalmouth scramble, and she poked it home.

Just three minutes later, Radomski made it 2-0, unleashing a shot from the top of the box that found the bottom left corner behind Vikes keeper Meaghan Storie.

In the second half, the grass pitch grew increasingly waterlogged, with well-kicked balls frequently stopping on a dime in puddles.

Radomski essentially put the game on ice in the 57th minute. Off Shelby Beck’s corner, Kara Delwo claimed possession and fed the ball back to Radomski at the top of the box, and she slotted a shot into the bottom right corner.

The Vikes’ Jaclyn Sawicki and Abigail Raymer banged shots off the crossbar in the waning minutes, but that was as close as they’d come to solving Klim, who made five saves for her sixth shutout of the campaign.

“On the first goal, I was actually kind of surprised it went in. I just tried to get it on frame and hit it as hard I could, because I knew it was going to be a little bit shaky with the wind and the rain and everything.

“The second goal, I was just screaming for it back, and (Delwo) passed it, and I hit it as hard as I could again – aimed for the corner, and it went in.”

The heavy rainfall prompted the postponement of the men’s quarter-final between UFV and UVic, which was scheduled for 7:15 p.m. The game is now set for noon on Sunday at Centennial Stadium, and in the event of more rain, it will be moved to Victoria’s Turf Field 2.

Radomski termed the conditions for the women’s game “crazy.”

“You had no time with the ball – you’d try to pass it, and it would go two feet even when you hit it as hard as you could,” she said with a chuckle. “It was crazy, but we got through with it, so I’m happy.”