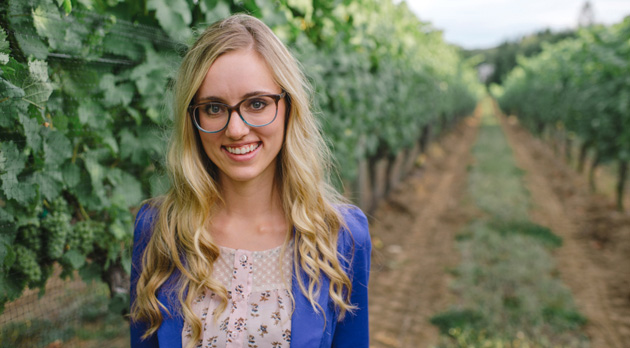 Tanya Jonker will never forget her years at the University of the Fraser Valley. They helped launch her into an exciting academic career researching the mechanisms of memory retrieval.

Now a PhD candidate at the University of Waterloo, Jonker graduated from UFV in 2009 with a Bachelor of Arts in psychology. She has been chosen as the Young Distinguished Alumni award winner at UFV for 2014.

“I’m very honoured to receive this award,” she noted. “It’s not something I expected so early in my career.”

Jonker is also a Vanier Scholar. The Vanier Canada Graduate Scholarships program (worth $50,000 annually to recipients) is designed to attract and retain world-class doctoral students and establish Canada as a global centre of excellence in research and higher learning. Among several other awards, she also received the prestigious Michael Smith Foreign Studies scholarship, enabling her to travel to England to further her knowledge in neuroscience.

“My research focuses on the mechanisms underlying forgetting in human memory,” Jonker says. “Specifically, I am currently interested in the cognitive mechanism of inhibition. According to an inhibition account of forgetting, memory representations can be suppressed to facilitate retrieval of other related memories. For instance, when you retrieve some information, it can result in forgetting related information.  Although this account is widely accepted, I am interested in testing its viability as a theory.

Once she earns her doctorate, Jonker hopes to pursue a career teaching and researching at a university.

“I believe that Tanya is a truly remarkable scientist who will continue to make UFV proud,” says Dr. Andrea Hughes of UFV’s Psychology department. “I have worked with many talented graduate students and none has ever come close to accomplishing what Tanya has done in a few short years. Her academic accomplishments are truly amazing. I firmly believe that she will be one of the very top academics in her field.”

Hughes noted that while Jonker was completing her honour’s thesis work for her bachelor’s degree at UFV, she chose to focus on the topic of retrieval-induced forgetting.

“As an undergraduate student at UFV, Tanya disagreed with the most dominant theory in the field on this topic, and has followed her passion, leading her to develop her own theory, which has become widely accepted by experts in her area.”

Most graduate students only hope to publish some of their work before graduation. Jonker has succeeded in publishing early in her graduate program and has published 10 articles in high impact journals. Her list of publications outshines many well established scientists. Her most outstanding accomplishment is having been published in Psychological Review, a top theoretical journal in the field of psychology.

“To be the lead author of an article in Psychological Review would be the pinnacle of the career of many talented research psychologists; for Tanya to do it when only four years removed from a BA borders on the incredible,” noted Dr. Sven van de Wetering, UFV Psychology department chair.

Jonker credits the small class sizes at UFV and the individualized attention from professors with helping her do well in her undergraduate years.

“The applied focus also helped me develop good writing and communications skills,” she says. “And we received detailed feedback on our work early in our academic career. In larger institutions it’s hard to make those connections.”

She took a variety of courses in her first year. Then she discovered psychology.

“I had taken a wide array of subjects, but professor Kim Striebel’s class really captured my attention, and I discovered that I liked the scientific approach taken in psychology.”

“Those of us interested in graduate studies received excellent mentoring during the application process. Dr. Andrea Hughes played a huge role in preparing me for graduate school.

“As a grad student I am exposed to some of the highest-caliber faculty in Canada at the University of Waterloo. This makes me incredibly proud of my UFV roots because I recognize that many of the faculty members at UFV are of equal caliber with respect to their outstanding mentorship.”

She is particularly touched that is was her former professors who nominated her for the award.

“It means so much to me that some of my professors at UFV nominated me for this award,” says Jonker. “I’ve always worked really hard – you have to in order to keep up — so it’s very nice to be recognized for some of that hard work.”