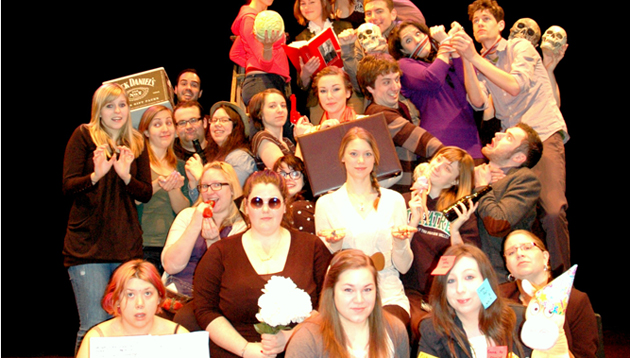 The Harrison Festival of the Arts has been part of the Fraser Valley’s cultural landscape for thirty-six years, and the University of the Fraser Valley has been involved from the beginning. The popular annual summer festival is back this year from July 12 to 20, and UFV is contributing several productions from its highly successful Directors’ Theatre Festival.
Directors’ Festival curator Ian Fenwick has announced that three one-act plays from UFV’s 2014 DFest directed by and showcasing UFV Theatre students will be featured on the Harrison Memorial Hall stage, Tuesday, July 15 at 8:30 pm. “Each one of the selected shows was a standout at DFest; seeing them together on the Harrison stage as part of the Festival of the Arts will be a special summer treat for theatre-goers and a great experience for our students.”

The UFV DFest shows appearing at Harrison are:

“It is considered an honour for our Directors’ Festival participants to be asked to Harrision,” notes UFV Theatre department head Bruce Kirkley. “Only a few of the shows get the call to go on the road and be associated with the Harrison Festival.”

For tickets contact the Harrison Festival of the Arts:
Online: harrisonfestival.com
By phone: 604-796-3664
In person: 98 Rockwell Drive, Harrison Hot Springs