A message from Dr. Jacqueline Nolte, Dean, College of Arts: 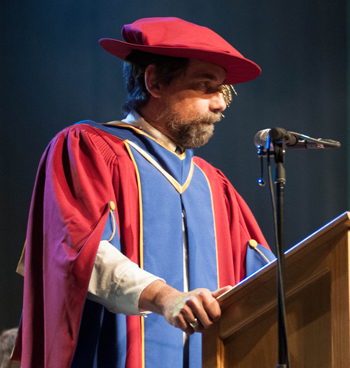 Dr. Ken Brealey has been appointed as the Associate Dean of Faculty of the College of Arts at UFV, effective May 2014. Ken joined the UFV Geography department in 2002, serving as department head from 2007 to 2011. Ken attained his PhD in human geography at UBC and went on to teach at Kwantlen, SFU, UBC, UNBC and Western Washington. He teaches the historical, cultural, and/or regional geographies of British Columbia, Canada, and North America, and the geographies of Indigenous peoples at global, regional, and local scales.  Ken has conducted historical, geographic, and cartographic research for a range of First Nations, including Xeni Gwet’in First Nation, Hwlitsum First Nation, the Okanagan Indian Band, the Snuneymuxw First Nation,  Nlakapamux Nation Tribal Council; Ktunaxa Nation Council, Esquimalt First Nation, and for the Cowichan Tribes on both the lower Fraser River delta and on southeastern Vancouver and the Gulf Islands.He has published in, amongst other journals, Western Geography, Canadian Geographer, and BC Studies.

In June 2012, Ken assumed the position of Acting Associate Dean of Faculty in the College of Arts, during which time he served on the Provost’s Research task force and the LOA subcommittees on Flexible Workload and Class Size, and Rank, Tenure and Promotion. In his capacity as Acting Dean, he contributed to collective agreement language related to rank and tenure, grandfathering and appointments, and academic freedom.

Ken took a lead in organizing the pedagogical components of the Nicola Valley Institute of Technology (NVIT) Advanced Chemical Addictions (ChAD) block transfer cohort agreement with UFV, which has resulted in 17 graduands from this program in its first year. He also designed, organized, and co-teaches an Indigenous Maps, Films, Rights, and Land Claims certificate (with author and filmmaker Hugh Brody, and David Schaepe and Sonny McHalsie, Sto:lo Nation’s Director and Co-Director of  Aboriginal Rights and Title). Taught four times since 2009, the certificate has been applauded by students and local media for its content, its relevance, the passion and skill of its instructors, and its importance to the Indigenization initiatives of UFV generally.

Ken assumes this position with a firm commitment to faculty success in furthering the strategic vision of UFV to deliver the best undergraduate education at the University of the Fraser Valley, to be a leader of social, cultural, economic, and environmentally responsible development in the Fraser Valley, and to be innovative, entrepreneurial, and accountable in achieving these goals. Ken is committed to continuing to build a level of trust and confidence in working with faculty and to base all that he does on the principles of respect, openness, fairness, and natural justice. He brings with him his particular interest in attending to issues of diversity in both the student and faculty bodies and his unwavering commitment to Indigenization within the university and in its external relations.

Dr. Alisa Webb is the new Associate Dean of Students in the College of Arts
Tracy Ryder Glass is the new Dean of the Faculty of Professional Studies