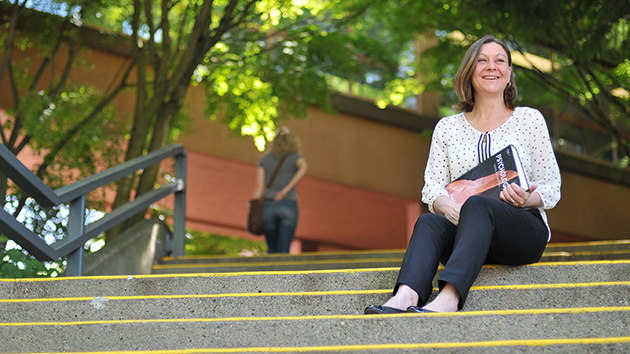 For a teacher committed to studying seniors, psychology instructor Dr. Andrea Hughes sure has a way with today’s youth.

As the 2014 recipient of the Teaching Excellence award at the University of the Fraser Valley, Hughes’ success is a product of her interminable fascination with studying memory, especially in older generations.

“I think students feed off my energy,” she says.

“I enjoy what I do and I find the subject matter genuinely interesting, but it helps to take it outside of the textbook and really engage with what you’re learning about.

“As an undergraduate student I had the incredible fortune of being exposed to research by Dr. Valerie Thompson and Dr. Jamie Campbell and I try to provide our students with that same opportunity that I was given.”

Combing through her glowing nomination package, themes that quickly arise include her respect for students, attention to student learning, exemplary scholarship, and professionalism.

Last year marked the graduation of one of her brightest charges. Sol Sun was a 2013 dean’s medalist and Governor General’s silver medalist who scored a perfect 4.33 GPA on his last 30 credits while earning a Bachelor of Arts degree in honours psychology.

A firm believer that one’s achievements are never truly individual, Sun attributed his success to having an amazing team of individuals on his side. First and foremost: Dr. Andrea Hughes.

“She was truly everything I could ask for in a mentor, personable, caring, experienced, intelligent, and always kept my best interests in mind. An enormous proportion of my success can be attributed to the amazing support I received from her,” said Sun, who presented alongside Hughes at several conferences, including the Canadian Society for Brain, Behaviour, and Cognitive Science AGM in Calgary.

Writing in support of Hughes’ Teaching Excellence nomination, he reiterated his appreciation from afar.

“As a graduate student at University of Toronto, I am fortunate to have the opportunity to work with some of the most distinguished names in the field. Yet even after these experiences, I think of Dr. Hughes as the single academic who had the greatest influence on my life, and I continue to hold her in the highest regard.”

Another former student, Tanya Jonker, still collaborates with Hughes while working on her PhD.

“As a graduate student at the University of Waterloo — one of the leading Canadian institutions for psychology — I am exposed to some of the highest calibre faculty in Canada. This makes me incredibly proud of my UFV roots because I recognize that many of the faculty members at UFV are of equal calibre with respect to their outstanding mentorship. And of these noteworthy UFV members, Dr. Andrea Hughes shines the brightest.”

Appreciative of the kind words, Hughes feels she’s simply sharing her passion. As an undergraduate student herself, Hughes helped pay for university by working in a care home, which helped develop her interest in the psychology of aging.

In addition to teaching and contributing to UFV’s Centre for Education and Research in Aging, Hughes also supports UFV’s Student Psychology Association. Her extensive body of research has included: Narcissistic Personality & Overconfidence in Eyewitness Memory; Memory for Birds: Older Adults Show Evidence for Learning of Complex Categories; Older Adults’ Ability to Interpret Sarcasm and Metaphor; Effects of Context on Memory Performance in Recognition and Recall; and Signal Detection Analysis.

Away from university life, Hughes enjoys spending time with her extended family, and exploring the outdoors with her partner and their dogs Bella and Dexter.

“Dr. Hughes represents what it means to be a teacher, academic, and mentor,” she says.

“She is the best professor I have ever had the pleasure of being taught by. My life is forever changed by the impression she has left on it and I can think of no one more deserving of the 2014 Teaching Excellence award.”