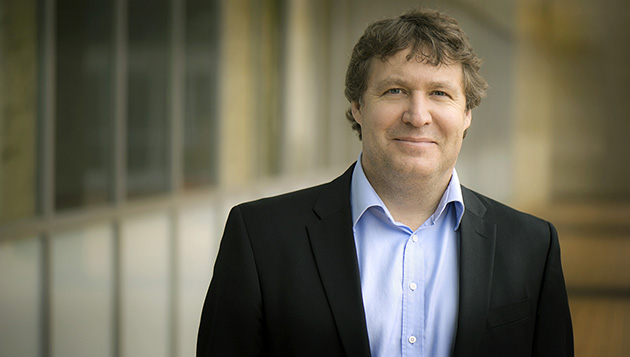 Whether lit by flickering oil lamps in bucolic Mexican farmsteads or glowing computer screens tied wirelessly across the world, quests for education and connection remain the same in the eyes of University of the Fraser Valley 2014 honorary degree recipient George Siemens.

Siemens will receive an honorary Doctor of Letters degree at UFV’s morning Convocation ceremony at 9:30 am on June 13 at the Abbotsford Centre. The public is welcome to attend the ceremony.

The irony of developing one of the world’s most innovative online education platforms after growing up without the basic tools of mass communication isn’t lost on Siemens, who was born into a Mexican Mennonite farm with no electricity. The house he moved to in Morden, Manitoba at the age of six held no newspapers, television, or radio.

Still, dinner tables in both homes featured all the facets of Facebook.

“The one difference is I jumped 400 years of history.”

In Grade 7, Siemens committed what his family may have considered the sin of flicking the switch on Commodore’s first full-featured computer, the 8-bit Personal Electronic Transactor. Though he had no way of knowing it at the time, he was sounding the first chord in his symphony of online learning. And, in effect, taking the first step towards receiving an honorary degree from UFV.

Along with University of Manitoba colleague Stephen Downes, Siemens launched what is widely recognized as the first Massive Open Online Course (MOOC) in 2008. That course on learning theory attracted enough students to fill a small town — about 2,300 in total.

Seen as a landmark in open teaching, MOOCs are an extension of distance learning that build communities for professors, teaching assistants, and students through online forums. They’re designed around the basic idea that if students are passionate for knowledge, and allowed to pursue that passion, they’ll be more motivated, engaged, and successful.

Not only do users learn from their own work, but others see mistakes and successes almost immediately.

“As you make your thoughts and work transparent, you’re teaching them by learning from your real-time experience.”

Siemens recently joined the University of Texas at Arlington as the executive director of the Learning Innovation and Networked Knowledge Research Lab after teaching at Athabasca University.

Though a pioneer, Siemens has been critical of MOOCs offered by leading schools for being strong on technology but weak on pedagogy. Still, he’s certain MOOCs will be the future of education one way or another, largely based on a belief the people paying tuition dollars have to be at the centre of the educational experience.

“Everything in the knowledge process is up for grabs and the future of universities lies in understanding how we create and share knowledge.”

Often offered free of charge, MOOCs have gained popularity across the world, stretching from Australia to Brazil, Japan, the UK and beyond. MOOCs have evolved into cMOOCs and xMOOCs, relying on either group work or modules, respectively. Essentially, they offer different means to the same end. Some use algorithms that teach according to students’ strongest learning practices. They consider, for example, whether math scores are weaker before or after that first cup of coffee. However, Siemens points out that though that style of teaching is effective for specific answer-based studies like math or science, it’s less effective for subjects dependent on human social factors such as philosophy, politics, or religion.

Despite the rise of MOOCs, Siemens says traditional universities will continue to play vital roles in educating generations to come.

There’s a lot technology can do to help provide personal knowledge, he says, but there’s still development of knowledge derived primarily through discourse and interaction with peers. If universities want to stay relevant in the lives of students, they have to start looking at what students want and need, what kind of tools and technologies they desire, and how they’re interacting with information outside of the class setting,

“Education today is about learners understanding relationships and not just memorizing facts,” he says.

“These are exciting times.”