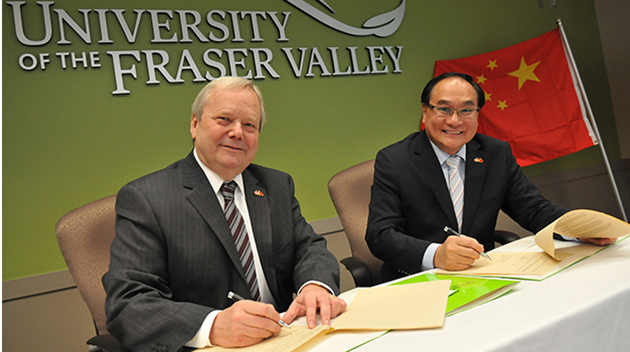 The University of the Fraser Valley will work with Concord College of Sino-Canada to provide aviation and business education to future pilots from China.

The two educational institutions have committed to a partnership that will see up to 30 Chinese students per year enrolling in UFV’s Bachelor of Business Administration in Aviation in Abbotsford. The flight training components of the BBA are offered in partnership with Coastal Pacific Aviation at the Abbotsford Airport. A signing ceremony was held at UFV’s Abbotsford campus.

UFV’s BBA Aviation is known for combining pilot training with business education, so that when students graduate they are prepared for a career as a professional pilot but also positioned to take on management responsibilities in the aviation field as their career progresses.

The partnership grew out of meetings in China between UFV president Mark Evered and Dr. Francis Pang, leader of Concord College of Sino-Canada, who has a long-standing relationship with the University of the Fraser Valley.

“I am very pleased to announce that Dr. Pang and I have committed to a partnership that will provide pilot and business training to Chinese students, here in Abbotsford,” said Evered. “ Dr. Pang and I see this as only the beginning of our work together, with opportunities that will significantly support Abbotsford airport development and both aviation and aerospace training in the region.”

Concord College of Sino-Canada is an educational organization delivering Canadian K to 12 education to thousands of Chinese and international students in cities throughout China. Dr. Pang is a celebrated educational innovator who has received numerous awards and recognition from the highest political offices in Canada and China.

Dr. Pang was awarded the Queen’s Jubilee Medal in 2002, and received the Great Wall Friendship Award in 2004. In 2007, the governments of New Brunswick and Canada bestowed Tributes of Honour upon Dr. Pang in recognition of his outstanding achievements and contributions in international education. In New York in 2012 he received a United Nations award for outstanding contributions to international education.

Graduating students from Concord College of Sino-Canada can now apply directly into the UFV BBA (Aviation) program. Students at CCSC will start working toward the credential by taking prerequisites while in Grade 10 at CCSC in China.

For more information about the BBA Aviation, go to: