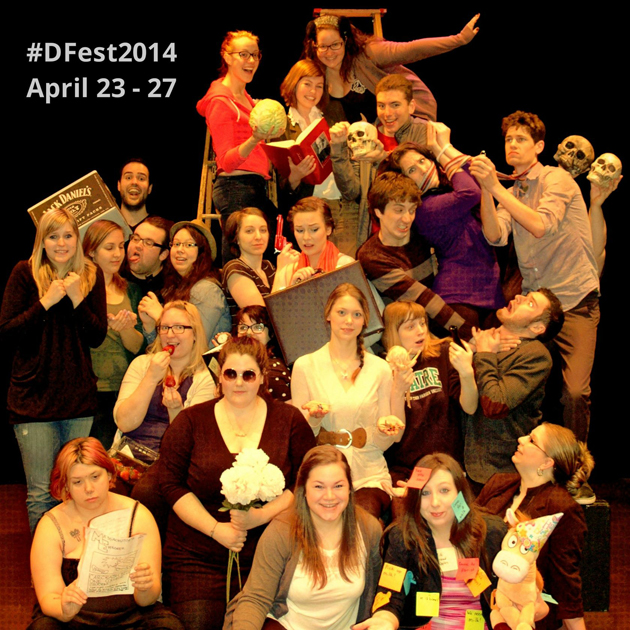 UFV Theatre presents the 19th Annual Directors’ Theatre Festival. The five-day festival will run April 23 – 27 at UFV’s performance theatre at 45635 Yale Road (at Airport Road) in Chilliwack. The festival begins on the Wednesday with a series of previews and matinees, followed by Thursday’s opening ceremony at 4:30 pm. Performances continue at various times Thursday, Friday, Saturday, and Sunday, concluding on Sunday at 11 pm. Single tickets are at an accessible rate of $5 per show, with packages of 4 tickets for just $15, or a festival pass valid for all 21 show slots for $40. The full festival schedule is available at UFV.ca/Theatre. Tickets can be purchased at 604-795-2814, theatre@ufv.ca or at the box office on the day of the show.

DFest is a festival of short plays directed and performed by UFV Theatre students as well as post-secondary students from Capilano University, Simon Fraser University, Thompson Rivers University, Trinity Western University, and UBC Okanagan. The festival has grown over the last two decades to become the biggest event of its kind in B.C., engaging over 150 students and 4,000 attendees in 2013.

This year, audiences can choose from 21 show slots featuring 40+ plays playing multiple times in two performance spaces at UFV’s performance theatre at is Chilliwack North campus.  Plays of nearly every theatre genre will be shown, from comedy to drama and everything in between. While many plays presented have been written by well-known playwrights, some have been devised by student playwrights. Back by popular demand is the original burlesque comedy, Mr. Bigg and Tall, written by UFV students Tim Howe and Stephen Wilhite.  There will even be staged readings of new plays written by upper-level English students who are learning playwriting from UFV professor John Carroll.

“The festival is a great opportunity to see and celebrate the work of students from across the province. Audiences can experience more theatre in five days than is possible in an entire year,” says UFV theatre professor and festival curator Ian Fenwick.

This year’s festival is sponsored by the UFV Student Union Society,  the UFV School of Criminology and Centre for Criminal Research, UFV Friends of the Theatre, and individual donors. Media sponsors are the Chilliwack Progress, the Abbotsford News, Star FM, CIVL Radio 101.7 FM, and The Cascade, UFV’s Student Press.