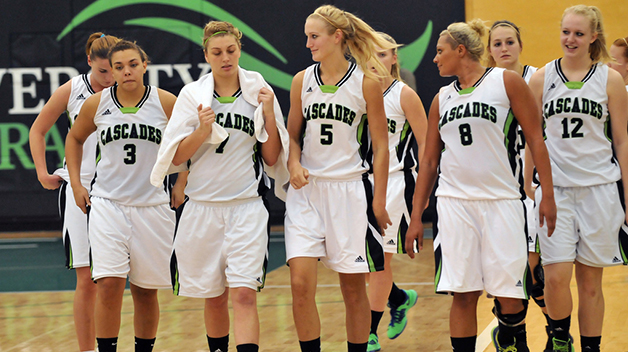 The UFV women’s basketball team returns to the CIS national championships for the second straight year this weekend.

See a preview of the Final 8 teams here.

The fifth-seeded Cascades tip off against fourth-seed McGill of Montreal on Fri, March 14, at 5 pm PST. You can watch it live online here:  http://english.cis-sic.ca/sports/broadcast14 .

The Athletics department will also have a live feed set up on a TV screen in the Envision Athletic Centre gym.

Game times for the games after the opening round will depend on how the Cascades fare against McGill.

The CIS national championship is sponsored by  ArcelorMittal Dofasco.

UFV went 0-2 last winter in its first-ever trip the CIS tourney, including a 70-52 loss to McGill in consolation action. The Cascades booked their ticket for the 2014 championship with an upset of heavily-favoured Alberta in the Canada West semis, defeating the Pandas 66-56 in their own gym.

The Cascades boast a 26-8 overall record against CIS opponents this season but are only 2-5 versus Final 8 teams, including 27 and 20-point losses to top-ranked Windsor at the St. Denis Centre in late December. Sarah Wierks was UFV’s top scorer (11.9) and rebounder (8.1) in league play.

“We are excited to be heading back to the Final 8. We expect to build off last year’s experience and we’re proud to represent the Fraser Valley and the Canada West conference in Windsor this week,” says coach Al Tuchscherer. “Our team has played with resolve this year and we have played some of our best basketball of late. We hope that surviving the Canada West playoffs will serve us well, as we know that we will have to be playing our best against the seven other great teams that have qualified for the Final 8.”