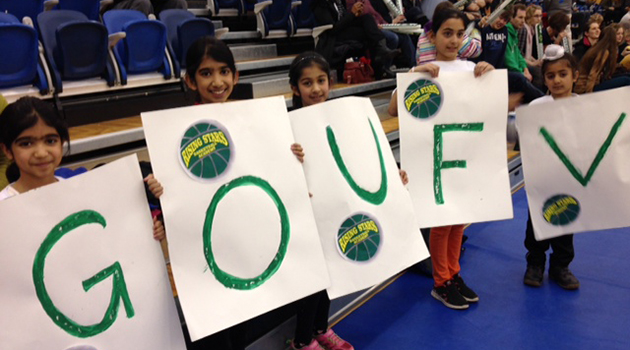 Both the men’s and women’s basketball teams will host home playoff series in February after earning that advantage in Canada West Pacific division league play. The women were tops in the Pacific division with a 17-5 record, while the men’s unprecedented 14-game winning streak and 17-5 record got them a second-place standing.

The men’s series starts this Thurs, Feb 20 against Lethbridge, while the women host Calgary starting on Thurs, Feb 27.

Most recently, the UFV Cascades men’s basketball team (17-5) tuned up for playoffs while extracting another win from the TWU Spartans (10-12) Saturday by a score of 83-78. The Cascades have now won 14 straight since the run began on Nov 29, 2013, taking a season that started as a mediocre 3-5 and turning it into something special.

The Cascades begin a best-of-three playoff series Thurs (Feb 20) against the Lethbridge Pronghorns at UFV’s Envision Athletic Centre. Tip-off is 7 pm, and games will continue at the same time Friday and Saturday as needed. Watch online at canadawest.tv.

Likewise, the UFV Cascades women’s basketball team (17-5) turned it on in the third quarter Saturday to beat the TWU Spartans (5-17) by a score of 55-39 at the EAC ahead of their playoff charge. The Cascades clinched first in the Pacific division on Thursday in the first half of the doubleheader, and finish only win short of their 2012-13 record (18-4).

The Cascades women begin their post-season at home next Thurs (Feb 27) at 7 pm against the University of Calgary Dinos, and games will continue at the same time Friday and Saturday as needed. Watch online at canadawest.tv.