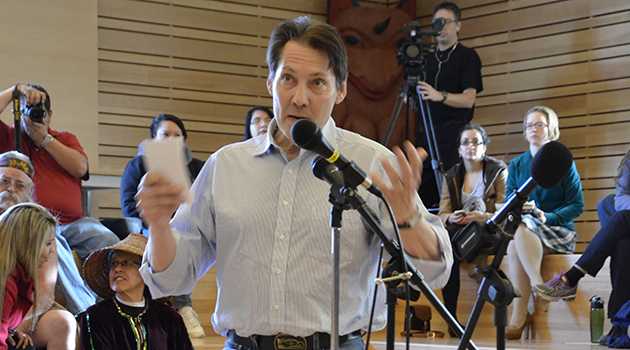 Under the direction of lead writer Robin Pierro, the report’s findings were handed over to Harding and four others (Jorge Barrera, Cindy Blackstock, Duncan McCue, and Mike Metatawabin) for consideration.

“Essentially it echoes everything I’ve seen in the past,” said Harding, a contributor to numerous studies of Indigenous representation based on traditional content analysis.

“But there is hope for the future, especially considering the continuation of JHR’s ongoing programs in northern Ontario, and events like UFV’s Indian Residential School Day of Learning.”

The report offered three conclusions regarding coverage of Aboriginal people in Ontario media: the Aboriginal population is widely underrepresented in mainstream media; when Aboriginal people choose to protest or ‘make more noise’ the number of stories focused on the community increased; and as coverage related to the protests and talks between Aboriginals and government became more frequent, the proportion of stories with a negative tone correspondingly increased.

In the report, Harding agreed with the challenges journalists covering Aboriginal issues face.

“Many reporters lack the knowledge of history and context that is essential for understanding complex issues that have long historical antecedents,” Harding said. “Furthermore, they often lack the tools to work with Aboriginal sources and issues in an effective and culturally sensitive way.”

Ultimately, Harding suggested the quality in Aboriginal reporting could be improved if reporters were more committed to reaching out and visiting the communities they’re reporting on. Publications could also hire more Indigenous journalists with inherent knowledge of native culture, and consider speaking with Indigenous people more often about stories as routine as the weather or interest rates.

For now, Harding says strides are already being made by bringing Indigenous culture and history to the forefront through events such as September’s special day of learning at UFV focusing on the Indian Residential School experience.

“Having UFV stand up and say that this is very important, and we are going to take extraordinary measures and devote that day to all aspects of learning about this horrendous experience is exceptional,” he said.

“That really means something … it’s walking the walk, not just talking the talk.”