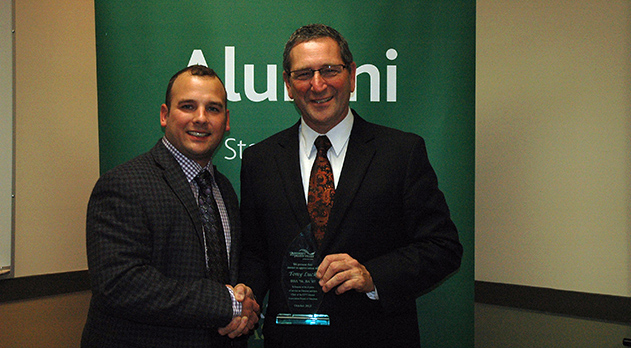 There was a changing of the guards on the board of directors of the UFV Alumni Association at its recent annual general meeting as Tony Luck completed his term as board chair and a new executive was voted in. 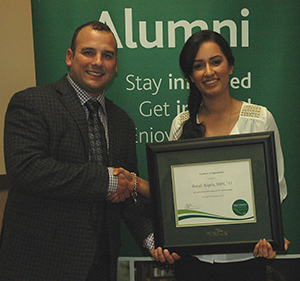 Baraa Ali (BCIS ’09) and Stephanie Jackson (AA ’11) were re-elected for two-year terms. Melissa Kendzierski (BA ’09) will continue to fulfill her term as director-at-large.

At its annual general meeting, the membership awarded Rupali Kapila (BSN ’11) with the outstanding volunteer award and said a fond farewell to the following three long-term directors. 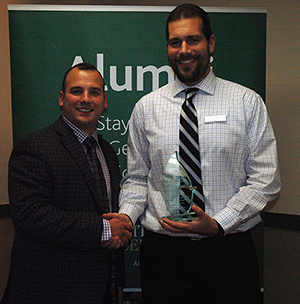 Mark Brosinski (BBA ’02) was elected to the board in 2006 as a member-at-large and served one term before taking on the role of treasurer. Serving three consecutive terms as treasurer, Brosinski has been a huge asset to the growth of the Alumni board. He also served as a member of the executive, governance and finance, and human resources committees. Over the years he participated in numerous events and activities representing the association.

Darren Penner (BA ’03) has been a long-term volunteer director, bringing leadership and commitment to the board for over seven years. Penner started as member-at-large in 2006 and served three consecutive terms as secretary. He was involved in the executive and governance and finance committees and lent his considerable knowledge of the law to guide the work of the association on the policy committee.

Tony Luck (BBA ’96 and BA ’06) started with the board as a member-at-large in 2007 and the next year was elected to serve as chair, which he has done for the past five years. Luck has been a leader, bringing change and growth to the association. He led the board through the transition to university status and through the process of establishing new high-level responsibilities for the association under the University Act to nominate the UFV Chancellor, and to have representatives on the Board of Governors and on senate. In addition, he initiated the decision to establish additional endowments for each of the university faculties, which will provide student awards in perpetuity. Luck led the board through its second three-year strategic plan and the signing of the Alumni Association’s second MOU with the university, and has positioned the association to embark on a new three-year plan.

“The Alumni Association owes much to these three long-term members, and we are pleased that Tony will remain active on the board as past chair,” said new chair Jason Barnes.

The Association will embark on a strategic planning process this month.