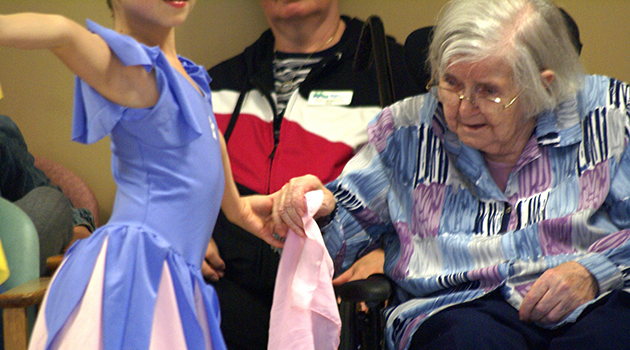 They’re Not Scary — a documentary video about an intergenerational dance program— is making its world premiere at UFV’s Abbotsford campus on Fri, Nov 29. This free public event takes place at 6:30 pm in B101 (lecture theatre).

A team comprised of faculty and student representatives from UFV’s Nursing, Kinesiology, and Media and Communications Studies programs worked together on the project, which ran for the first six months of 2012.

The research component of the project measured the physiological and cognitive effects of the dance program on the residents, as well as exploring the experience and attitude changes of the girls participating.

Dr. Michael Gaetz of UFV’s Kinesiology and Physical Education department oversaw the physiological testing and nursing instructor Shelley Canning focused on cognitive testing. They were aided by nursing student Rachel Trybuch. Shelley Canning also conducted interviews with the schoolchildren prior to, during, and at the end of the six-month dance program. And a group of five media and communications students and one volunteer, led by instructor Darren Blakeborough, filmed the weekly dance classes as a directed studies project.

The project results did not show measurable changes in terms of physical or cognitive benefits for the residents, many of whom were mobility challenged and living with a level of dementia. However, anecdotal reports from staff of the care facility showed a more positive emotional affect and level of engagement after participating in the dance classes.

“For some reason an arts-based intergenerational activity reaches the hard-to-engage seniors,” reports Canning. “Residents that wouldn’t normally show interest in activities were very engaged when it came time for the dance lessons. For some, it was the only program that they would participate in.”

As time went by the children became much more comfortable around the residents. They began to see beyond the disabilities, Canning says. Their teachers and parents talked about the increased empathy and understanding they saw in the girls.

“By the end they were very comfortable with wheelchairs, walkers, oxygen, and the other accoutrements of an aging population,” said Canning. “As one little girl summarized it: ‘They’re not scary.’”

Blakeborough’s team chose the girl’s statement as a title for the video.

“About two months into the project at the conclusion of class one day we were filming and asked one of the young girls: ‘What have you learned so far about the residents?’ And she paused for a second and then proudly exclaimed ‘They’re not scary’. Since some had expressed concerns before the project started about what the ‘old people’ would be like and this was all about breaking down those ideas, and because it is provocative, we chose that quote for the title,” he said.

All the students involved in the project gained valuable applied research skills. The nursing and kinesiology students did so through direct research. But for the media and communication students, the research was focused on the practice of documentary making.

“I thought it was a great project for these students for a number of reasons,” said Blakeborough. “It gave them both practical media experience and project coordination skills. In addition to the incredible hours put in with the filming, they produced two different papers over the course of the project: a critically reflective exploration of the elements and process of the documentary genre, and a storyboard of how they would frame the documentary based on the footage we collected and what they witnessed first-hand. The project itself functioned to make personal the theories and ideas that they encountered in the assigned texts and my hope is that it brought them alive in a significantly more meaningful way.”

“Being involved with the documentary project has been nothing short of an amazing learning experience. The beginning of this adventure was intimidating; we knew that a group of girls was going to meet a group of elders, but what would happen?” says Siemens. “There were concerns it would be an awkward interaction; the girls could have been distant or the elders could have been disconnected. After one week of filming, these relationships started forming, and it was hard to take your eyes (and camera) off of these two very different groups of people learning to care for one another.

“The whole experience goes to show that interdisciplinary research is useful and beneficial. It was so exciting to work with the nursing and kinesiology students — I don’t have those skills and they don’t have mine. We worked together, and we all made new relationships and researched within our own fields.”