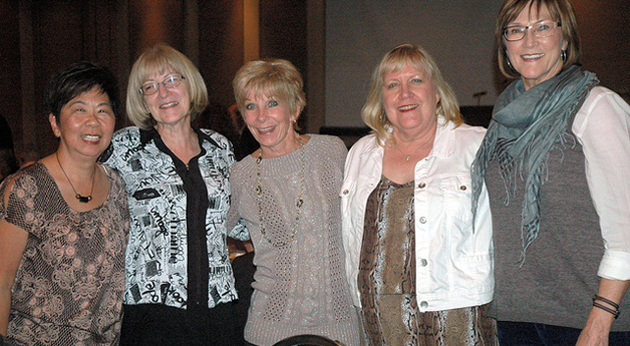 The program is now known as Applied Business Tech, but back when these women all worked together it was called Office Careers. Sandi Sasaki (left) and Kathie Ramsay (second from right), are welcomed to retirement by previous retirees Jane Dean, Carole Higginbottom, and Bonnie Anderson.

UFV honoured its 2013 retirees on Oct 16 at a banquet at the Ramada Inn. Thirty long-time employees retired this year, and 20 of them attended the dinner. The longest-serving retirees started in 1976 and worked here for 37 years.

As usual, many retirees from years past took the opportunity to come back and visit with former colleagues and reminisce for the evening. Many current employees also attended to wish the new retirees well.

“You started at a college, built it in to a degree-granting institution, and retired from a university,” said UFV president Mark Evered. “We stand in awe of your achievements, and will not forget our roots, and your commitment to your students and your program.”

Board Chair Barry Delaney was attending his first retirement dinner, and told the assembled crowd that we have two legacies in life.

“The first is your family, but the other is what you do with your professional life, which is what we are honouring tonight. You are all retiring from worthwhile work that touched students’ lives and helped them build confidence, skills, and self-esteem. You can look back and say ‘that was good.'”

FSA president Vicki Grieve admitted to feeling bittersweet about the reason for the gathering.

“We’re here to honour you retirees, but also to offer moral support to the people who must stagger on in your absence. We will be feeling the absence of people who we love to see in the hallways, share a laugh with, or go to with a problem. You are all so much appreciated, but it’s time for you to do different things.”

Chancellor Brian Minter told the retirees that they had affected the lives of students.

“You can tell yourselves that together we created a rich atmosphere and a dynamic post-secondary institution.”
A conversation between two retirees from years past reflected the deep connection many still feel to UFV: “We made this place! It was ours!”

All the best in your retirement!