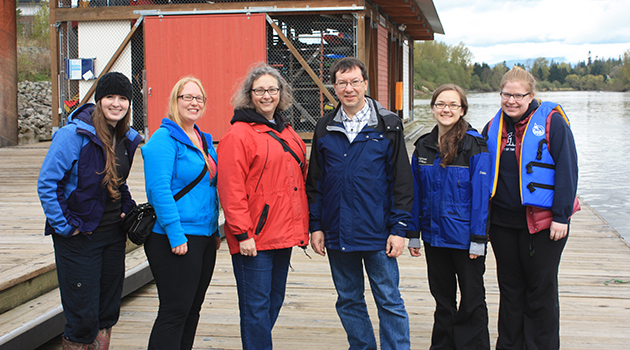 Known as a climatologist when he joined the University of the Fraser Valley more than 20 years ago, the bulk of Marsh’s research has revolved around water — ranging from small tributaries to Abbotsford’s aquifer — and he’s currently four years deep into a project that he says he plans to continue until he retires.

“And even then I really hope someone continues this work.”

In addition to pulling Fraser water, the UFV project samples four local tributaries impacted by urban growth and agricultural activity in order to understand their geochemistry.

The main study focuses largely on the movement of carbon in the Fraser — how much of what (and of what age) flows into the ocean. Those samples help WHOI and Woods Hole Research Centre (WHRC) scientists understand how changes on land are impacting the marine environment.

“Basically, we’re taking the pulse of the Fraser,” explains Gillies.

“I’ve always liked practical problems, and working on the Fraser certainly falls within that category.”

The efforts on the Fraser are part of a huge project involving some of the world’s largest rivers, including the Brahmaputra, Congo, Fraser, Ganges, Lena, and Yangtze.

“The idea eventually is to load comprehensive information from all rivers onto a website for the world to use,” Marsh says.

“This is the type of project you can’t look at only for one or two years, we’re talking about decades.”

Scientists, geographers, and loggers alike are keeping a close eye on widespread pine beetle damage throughout B.C., and especially along the Fraser’s watershed region. Because of beetle-kill forests and salvage logging (the blue-stained pine is proving popular in some markets), the Fraser basin has become vulnerable to increased flooding and erosion, potentially altering the river’s carbon content dramatically.

An increase of ocean carbon could affect the ability of some crustaceans to make shells. Sitting near the bottom of the ocean’s vast and interconnected food chain, crustacean depletion could have a serious impact all the way up the chain to the largest of ocean creatures, including whales.

“There are some serious negative impacts that are possible,” Marsh says.

One tell-tale sign of expedited erosion would be younger carbon deposits making their way downstream, but data is still being processed — and at significant cost. A single Fraser River sample can cost thousands to fully analyze. Fortunately, geochemist and Global Rivers Observatory co-director Bernhard Peucker-Ehrenbrink has been extremely generous in ensuring the Fraser project succeeds.

“He’s one of the most positive scientists I’ve ever worked with.”

In addition to covering analyzing costs, Peucker-Ehrenbrink provides select UFV students with the opportunity to experience two- or three-month practicums at the WHOI and WHRC.

Additionally, UFV students working on the Fraser project have gone on to present at major conferences in New York and San Francisco, plus local conferences at SFU and UBC Okanagan. 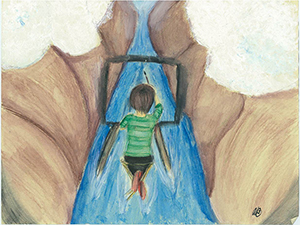 As if studying some of the world’s largest rivers in hopes of protecting the ocean wasn’t enough, the WHOI and WHRC’s work has also inspired a major art project. Driven by UFV’s Janmaat and opening this month (September) at the Fraser River Discovery Centre in New Westminster, the exhibit will be on display for at least three years before being split into a traveling portion and a permanent portion at the FRDC. Featuring 300 pieces of artwork created by children depicting the waterways studied by WHOI and WHRC, the exhibition will include the Lena, Ganges, Congo, and Fraser.

The brainchild of a Siberian riverboat captain’s 13-year-old daughter, it has received contributions from children from 10 local schools between Hope and New Westminster.

Though excited for the art project, Marsh’s mind is focused on university students while looking to hire new researchers to assist with water collection. As previous students have proven, there’s no telling what lies beyond the edge of Langley Rowing Club’s dock.

“You don’t know where a project like this could take you,” he says.

“It could change your life.”

See some of the children’s art being featured at FRDC here.