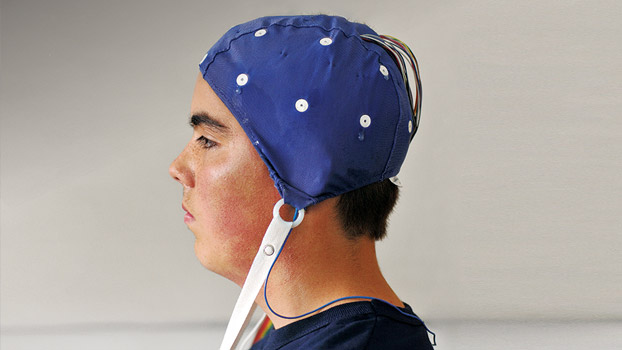 A rainbow of wires streams across the table as UFV kinesiology instructor Michael Gaetz whispers “Breathe . . . perfect” and the bulky teen stares ahead, unblinking.

The test, taking place in a small room at the University of the Fraser Valley’s Chilliwack campus at Canada Education Park, is more than an exercise in meditation — it’s part of an ongoing study placing local athletes head and shoulders above the rest when dealing with the increasingly troublesome world of concussions.

Led by Dr. Gaetz, and involving football players at Chilliwack’s G.W. Graham middle/secondary school, the study is built on baseline testing — measuring students’ physical and mental capacities before they suffer concussions, not just after.

“It’s the only way to get a sense of where the student is starting from,” Dr. Gaetz says. 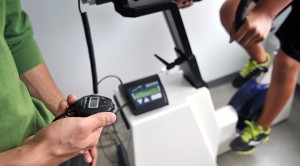 Armed with that information, G.W. Graham Grizzlies staff can immediately determine if a player suffers a concussion during a game or practice by issuing a series of sideline tests, and measuring results against his or her baseline information gathered at UFV — potentially eliminating the chance of a secondary (and often more severe) injury.

As time passes, tests also determine where a player is in terms of recovery, and what level of physical exercise is appropriate — if any.

“It allows us to say ‘you have a concussion, now let’s manage that concussion,’” explains Dr. Gaetz, who is currently assisted by five UFV student volunteers.

“We’re doing this as a service to the community,” he says.

Needless to say, it’s a program the Grizzlies have embraced with open arms.

Entering only their second season, G.W. Graham’s football teams (Grade 8, jr. varsity, and varsity) are rushing past programs in existence for decades.

“It immediately put us in the spotlight in the province, and now all high school teams are trying to find a way to follow us,” says G.W. Graham athletic director Jake Mouritzen. 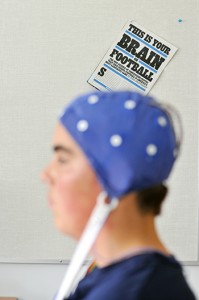 In addition to eliminating the peer pressure of playing through an often invisible injury, Dr. Gaetz’s testing alleviates strain on parents and coaches alike when it comes to deciding when a student is ready to play again.

“We’ve taken all the guessing out of it, and we’re relying on science,” Mouritzen says, adding 90 per cent of his 100 athletes were already tested by July ahead of fall’s football season.

“We’ve been really blessed and very grateful to UFV and Dr. Gaetz for involving us in this program . . . it’s absolutely world class.”

And along came Gaetz, who made concussions the subject of his doctoral thesis while studying at Simon Fraser University.

With UFV’s new Chilliwack campus opening so close to G.W. Graham, the partnership was a no-brainer.

“This is what community partnerships are all about,” Dr. Greggain said, calling Gaetz’s research “absolutely phenomenal work.”

While his role with the team involves looking after the clinical side of concussions, Dr. Greggain says the relatively short period of collection means data is not yet conclusive when understanding whether or not concussions are more damaging to younger people. That said, he adds, “We think (youth concussion prevention and treatment) is more important than with adults. Cognitive ability needs to be at its highest during high school and college.

“We believe this is of paramount importance . . . we want to protect (student–athletes’) brains and livelihood — more than their chance to get back out there and play more football.”

And while Grizzlies players allow him to gather information for his concussion research, Gaetz says the program — above all else — is simply another way UFV’s connection expands beyond campus walls.

“It’s one way we can help ensure the community is looked after, now and in the future.”