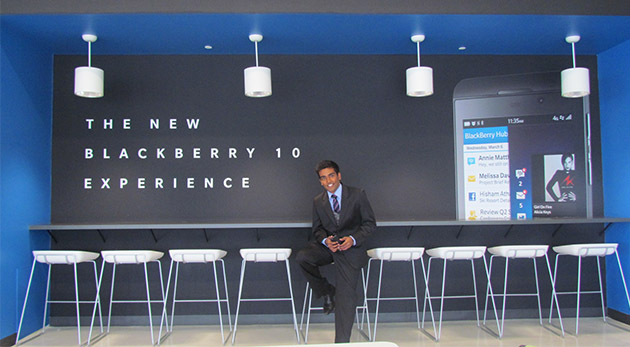 In summer, many people enjoy the bounteous crops of seasonal fruits, including blackberries.

Richard Nair is enjoying a different type of BlackBerry, as he completes his fourth consecutive cooperative education work term with the technology company BlackBerry (formerly Research In Motion), producers of smartphones, tablets and mobile services.

Nair’s dream was to come to North America from his native Mumbai, India, to launch his career in information technology, and the University of the Fraser Valley helped him get there.

Nair had completed a three-year Bachelor of Science in Information Technology degree at St. Andrew’s College (part of Mumbai University) but wanted to add a fourth “capstone” year and try learning in a North American post-secondary environment. He is now completing a Bachelor of Computer Information Systems degree at UFV, with a cooperative education option.

He heard about UFV from a friend in India who tucked a brochure from the university into his backpack, telling him “you’ve always said you want to study in North America. Here’s your chance to make it happen!”

So he packed up and moved to Abbotsford for the start of the January 2012 semester, just in time for his first snowstorm. Studying at UFV was a culture shock for Nair, in a good way. 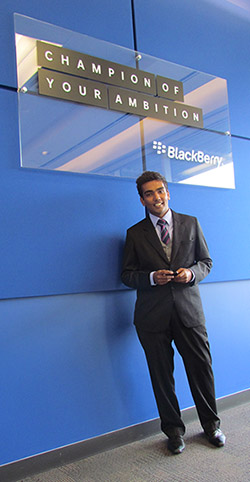 “In India, studying is very traditional and by the book, much more formal than in Canada. At UFV the instructors were accessible at all times, and very easy to speak to and willing to discuss anything to do with projects we were interested in, not just what was in our textbooks. They’re very committed to helping us understand our subject, and allowing us to learn in ways that worked for us.”

After completing a semester of studies at UFV, Nair started the first of what would be four consecutive work terms at BlackBerry. He has now been in Waterloo, Ontario for a full year, and is loving the “real world” work experience that the co-operative education model provides.

In co-operative education, students combine study semesters with four-month paid work terms in areas related to their field of study.

“I was very blessed to be able to get into a co-op position so soon after arriving in Canada,” Nair says.

In his first term at BlackBerry, he worked on a team focused on commodities and suppliers, helping to create a mapping feature to help the company analyze where the commodities it relies on come from and identifying options should supplies become unavailable due to unforeseen circumstances.

In his second term, he started a 12-month stint (three back-to-back terms) focused on his preferred specialty, project management. Some of his projects focused on quality reporting as BlackBerry transitioned to the new BlackBerry Z10, the first new BlackBerry 10 device to launch last year.

“I was told at the start that if I accepted this term, they’d be training me for two months and then treating me like a full-time contract employee and I’d be handling projects by myself and encouraged to make decisions. I have full independence to lead my projects and my manager is available for support and mentorship when needed. I’m really getting to experience the idea of what project management is about and gaining experience across the whole company.”

He’s enjoying the immersion in a major global high-tech company, the access to mentors at all levels of management, and the chance to pitch ideas and opinions to some key executives within the company. Once such idea is based on tapping the potential of the young bright minds of co-op students.

“I think there would be real value in a company gathering together co-op students from different departments within the organization for regular brainstorming sessions, as we all come to the company with a clean slate and fresh ideas.”

Although his time at UFV has been relatively short, Nair is extremely grateful for the orientation to Canadian society and the workforce that his time as a UFV student has provided.

In addition to the knowledge shared by his instructors, he appreciates the support he received from staff within the Computer Information Systems department and the co-operative education coordinators from the UFV Career Centre.

“It’s really great that the coordinators check in with myself and my manager and help liaise and deal with any concerns that either of us may have.

“Some debts can never be repaid. The ones I owe to UFV and BlackBerry, especially my manager and team, are ones that I humbly cherish. University and work are supposed to teach you about the subject at hand — I’ve been blessed as the lessons that I Iearned were definitely for life.”

He’ll be returning to UFV this fall to take five or six more courses with a goal of finishing off the academic requirements of his degree, and is hoping to continue his career in Canada if things fall into place for him after that.