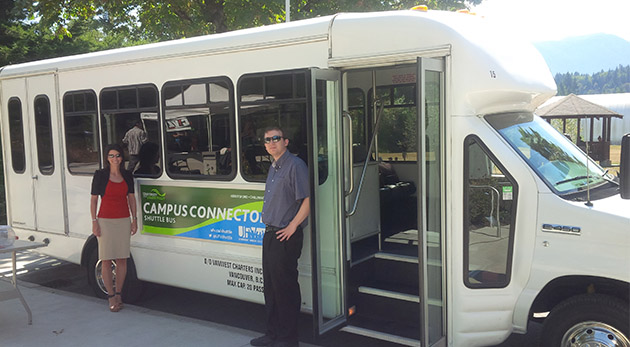 It’s going to be a lot easier for students and employees to travel between the Abbotsford and Chilliwack campuses of the University of the Fraser Valley this fall, thanks to the new Campus Connector shuttle bus service.

The Campus Connector, a partnership between the university and the Student Union Society, will run 15 times a day both ways from Monday to Thursday, and eight times a day on Fridays. The shuttle service will consist of two 20-passenger, wheelchair-accessible buses.

It will allow students who live in Abbotsford to get to classes at the Chilliwack campus at Canada Education Park, including the Trades and Technology Centre. And it will provide Chilliwack students with transit access to the Abbotsford campus on King Road.

“It is very important to our university to have our campuses well connected. We know that many of our students live in one community but study in another, or may want to attend special events. While we can’t connect all of our eight university locations in the Fraser Valley by shuttle at this time, this is a very positive start,” said Gordon. “We are very proud of this partnership between the university and the Student Union Society.”

Shane Potter, president of the UFV Student Union Society, is also enthusiastic about this new initiative.

“Due to the lack of public transportation between Chilliwack and Abbotsford, there has been a strong push from students for solutions. Our overwhelming response from our student referendum on the shuttle, with over 75% approval, as well as the constant feedback and support we have been receiving from students, is exciting,” said Potter. “I am thrilled that now we have an option for students to travel between the Abbotsford campus and the Chilliwack campus at Canada Education Park. Even students who have cars are welcome to park them, ride the shuttle, save money, and reduce their environmental impact.”

The Campus Connector shuttle will make stops at the Abbotsford campus and at two locations on the Chilliwack campus at Canada Education Park (Trades and Tech Centre and Building A). The stop in Abbotsford is located in the transit loop outside the Peter Jones learning commons. The stop in Chilliwack is located between Building A and Building V. The Trades and Tech Centre stop is adjacent to the TTC building.

Going the other way, students will be able to arrive in Abbotsford as early as 7:55 am with a 7:15 departure from Chilliwack, and come back to Chilliwack as late as 11:25 pm by catching the 10:45 pm bus (with earlier end times on Fridays, when UFV does not run as many classes).

Students will not have to pay when boarding the bus. UFV students voted to support the shuttle bus in a referendum this spring, with part of the cost to run the service incorporated into their student fees ($6.75 per semester), and the remainder supported by UFV.

Riders are required to show their valid student or employee identification to use the shuttle and students using the shuttle will have first priority for boarding.

The Campus Connector addresses a long-standing transportation challenge between the UFV campuses in the communities of Abbotsford and Chilliwack.

A full schedule for the Campus Connector shuttle can be downloaded here from ufv.ca/shuttlebus.

Students and employees with mobility issues or other disability-related needs are encouraged to book ahead for individual trips or the entire semester by calling Student Services at 604-854-4528 or 604-795-2808.

For the most up-to-date information on the Campus Connector shuttle follow it on Twitter at @UFVShuttle or go to ufv.ca/shuttlebus.