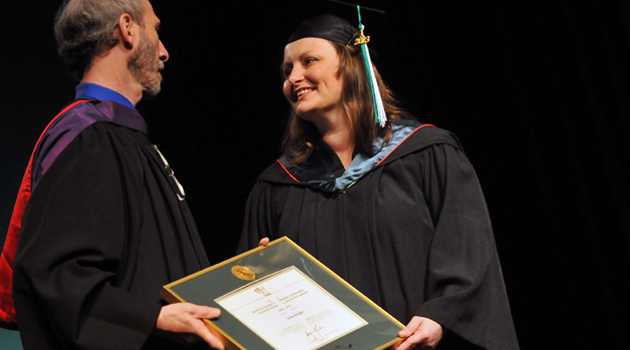 It didn’t take long for a Master of Social Work student to break the monopoly held by criminology grads on the Governor General’s gold medal at the University of the Fraser Valley.

Until this year, the only program graduating master’s students at UFV was the Master of Arts in Criminal Justice. So they had a lock on UFV’s most prestigious academic medal, which goes to the student with the highest grade point average in a graduate degree program.

This year, the Master of Social Work program graduated its first batch of students, and Diane Keegan of Abbotsford emerged as the top academic across both programs.

But for Keegan, that distinction is simply another step in her academic work, focused on breaking dangerous cycles in family conflict while easing pressure on B.C.’s congested family court system.

Her 20 years of working with parents and children has led her to better understand the impact high-conflict separation has on families — characterized by elevated anger, hostility, and distrust between parents — resulting in high levels of litigation, alienation of the child by one parent, and domestic violence.

“I feel really passionate about helping these families,” she explained.

“These are parents who never agree on anything, and are so ingrained with their position they get stuck in it … but what’s important is knowing it’s OK to have differences. You can still feel emotions, but it’s important to learn how to manage emotions and respond effectively.”

Consequently, Keegan’s major paper examined existing services available for parents dealing with high- conflict issues after separation, with a focus on services as a means for reducing conflict and improving overall family functioning.

That research, and the countless hours of hard work behind it, paved Keegan’s way to an overall grade point average of 4.27, UFV’s highest academic performance at the master’s degree level. It earned her the 2013 Governor General’s gold medal as a member of UFV’s inaugural MSW class.

“I knew my GPA was high, but didn’t know about the award,” she admits, crediting her success to steely commitment, her senior supervisor Dr. Adrienne Chan, and a supportive family.

Returning to her Abbotsford home after a full day as a social worker with the Fraser Health Authority, Keegan often found floors swept, laundry folded, and dinner on the table, allowing long nights of uninterrupted research and writing.

That dedication led to discovering that existing intervention services are perceived as inadequate in addressing needs of high-conflict family members. Participants in her major study consistently pointed to a distinct lack of accessible long-term, cost-free, and therapeutic services — all things Keegan plans to personally rectify.

With her MSW in hand (following a BA in psychology from York University, BSW from UFV, and social services diploma from Humber College), Keegan hopes to fill those gaping needs by offering consulting and therapy services, possibly in conjunction with her husband Robert, a part-time university student himself learning about international studies and history with an eye on law school.

While their integrated service model would begin as a private enterprise, Keegan would like to see the practices embraced by B.C.’s justice system, which she estimates is currently bogged by approximately five per cent of parents in conflict consuming 95 per cent of family court time.

“I want to teach parents to co-parent, understand their roles and help them make things better for their children.”

But none of it would have been possible without the guidance and support of Dr. Chan, who Keegan also worked under as a research assistant.

“She’d point me in the right direction and leave me be, but would always be there when I needed her. I’ve really appreciated the trust and commitment she puts into people,” Keegan said.

As an added bonus, Keegan isn’t the only family member crossing a stage under cap and gown this June — her daughter, Logan, graduated from Abbotsford’s W.J. Mouat secondary school too.

In addition to showing her teen the work involved in achieving post-secondary goals, Keegan says her commitment to UFV’s master’s program has passed along the indelible lesson that lifelong learning is possible.

“You can always change and learn more.”

And as this year’s Governor General’s gold medal winner, nobody knows that better.

UFV, partners, and donors team up to fund BC School of Agriculture
Plecas named professor emeritus at UFV