From seawater toxicity to music on The Simpsons, UFV’s most impressive student research was recognized recently at Abbotsford’s Ramada Plaza & Conference Centre. 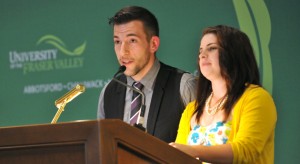 The invite-only affair brought high praise from UFV Chancellor Brian Minter, who referred to the research as “absolutely amazing excellence.”

UFV Board of Governors vice chair Henry Jansen said the students’ work is an impressive reflection of the type of research that goes on at UFV. He cited examples that explored everything from to solving bee shortages to monitoring decibel levels in plumbing.

And while successful, in-depth research achieves high marks from instructors, Provost and Vice-President, Academic Eric Davis said it also teaches students that they have employable skills, all while strengthening the backbone of the university.

“Student research is central to what UFV is and does,” Davis said, pointing its high value being reflected in UFV’s nine Institutional Learning Outcomes — a set of knowledge, skills, and abilities that the UFV community has collectively decided that every graduate should possess. 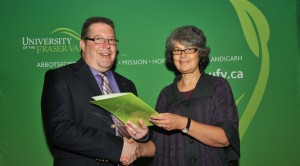 Of all the evening’s speakers, two stood out — for standing together. The husband-and-wife pair of Shea and Jessica Wind were rewarded for their research in Indo-Canadian and Media studies, respectively.

Shea Wind (Indo Canadian Studies): White-Canada Forever: A Look Through the Eyes of the Vancouver Daily Province Newspaper from 1906-1915

Curtis Robinson (Philosophy): Heidegger’s Being and Time: Introducing the Project

Elizabeth Ashton (Political Science): Turned On and Tuning In or Dropping Out: An Investigation of Youth Political Engagement in the Fraser Valley

Angela Ostrikoff (Sociology): Look at Her! A Qualitative Study of Slut-Shaming and Gossip

The 2013 Industry Liaison Research Award went to Meagan Beatty, for her research into converting plastic waste products into fuel oil.

Each winner received $1,000, divided equally the case of group projects.

To be eligible, students must have completed a research project while a full-time UFV student (enrolled in at least 9 credits) during the Summer 2012, Fall 2012, or in the Winter 2013 semester.