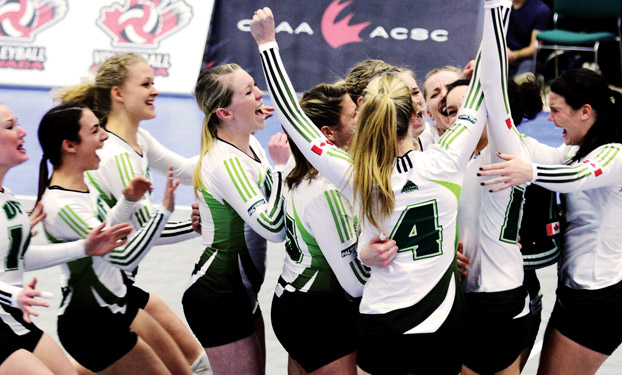 It’s no longer a question of “Where is Abbotsford?” It’s more like, “Oh no! We have to play the Cascades again?”

This year’s version of the UFV Cascades really put the Fraser Valley on the map.

On one special day, January 7, the women’s volleyball team was ranked number one in the country at the college level, and the women’s  and men’s basketball teams were ranked first and fourth respectively at the university level in Canada. Three of UFV’s four winter sport programs were in the top four in the country. 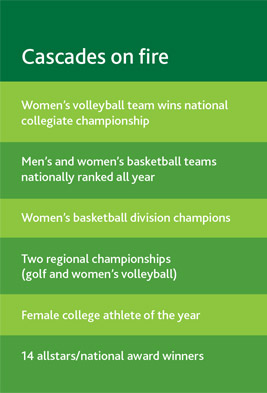 “We had a remarkable year in our court sports, they did an unbelievable job of representing themselves and our school,” said UFV athletic director Rocky Olfert, who is completing his first year at the helm.

“I feel very thankful for the opportunity to work at a great place like UFV. It’s provided me with a new challenge that I am really excited about, and to work alongside great UFV staff and student-athletes doing what I love is all anyone can ask for.”

UFV established several school records that were broken a year earlier. The women’s volleyball team finished with an amazing 27-2 record (22-2 regular season and 5-0 post-season) for a winning percentage of 93 percent. The Cascades won  the program’s first-ever Pacwest league  title by one game over VIU, defeated crosstown rivals CBC Bearcats 3-0 in the Pacwest  championship game to capture the team’s first conference title, and two weeks later defeated  the Alberta’s Lakeland College Rustlers by a  3-0 score to earn the program’s first national crown.

Bruce was not alone at the conference level. Brittany Stewart, Kate Bilodeau, and Krista Hogewoning were named to the second Pacwest conference all-star team, and Kira Tome was named the Pacwest  conference rookie of the year Jenna Evans  was named the most valuable player of the 2013 CCAA national championship tournament in Lloydminster, Alberta. 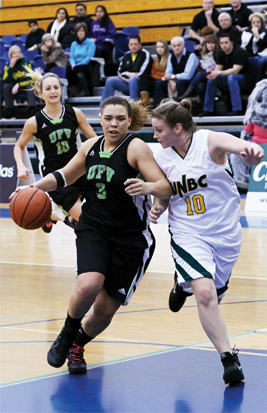 The women’s basketball team also shattered the program’s record book, winning their first-ever Canada West Pacific Division title with an 18-4 regular season record, two wins better than the second- place UBC Thunderbirds at 16-6. The Cascades  defeated the University of Saskatchewan Huskies two games to one in the conference quarterfinals at the UFV Envision Athletic Centre, and advanced to the conference Final Four for a third straight year. UFV needed one win at the Final Four to earn the school’s first-ever ticket to the CIS elite national championship. UFV fell to eventual Canada West champion University of Regina Cougars  84-77 in the semifinal, but in the bronze medal game, UFV outscored the University of Alberta 30-8 in the fourth quarter to capture the bronze medal with a  68-57 win,  earning  the program’s first Canada West medal and a trip  to their first CIS national tournament.

At the CIS Final Eight, UFV represented Canada West and the school by playing very competitive basketball against Saint Mary’s  Huskies.  UFV battled their Atlantic opponents for  the entire game and came back from a 14-point deficit t to narrow the score to 51-50, , but Saint Mary’s held on for a 62-57 victory.

In the CIS consolation semi-final, the McGill Martlets of Quebec defeated UFV 70-52 to end the Cascades’ very successful season. UFV finished with 21-8 record (18–4 regular season and 3–4 post season) for a 73 percent winning mark. 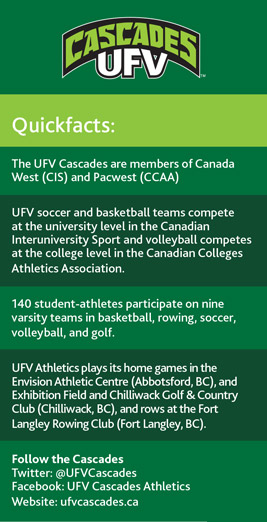 The men’s basketball team was ranked in the CIS top ten poll for 14 of the 20 weeks during the 2012/13 season. UFV had a banner year under some challenging circumstances. The team went through many changes over the summer of 2012, with three starters either graduating or transferring and the head coach moving on. The Cascades turned to first-year head coach Adam Friesen  to take control of the nationally ranked program. Led by veterans Sam Freeman, Kyle Grewal, and James York, the team posted a 12-10 regular season record, good for fourth place in the Pacific Division of Canada West. In the post-season, UFV shocked the Canada West basketball world by going into Saskatoon and defeating the heavily favored Saskatchewan Huskies two games to one..

UFV broke a school record in the 92-76 victory-clinching game, as six different Cascades were in double figures led by veteran Klaus Figueredo with a team-high 22 point performance.

One win away from a second straight trip to the CIS elite Final Eight tournament, UFV gave the defending Pacific Division champions UBC Thunderbirds all they could handle in the Canada West semifinal. Leading by ten at the half, the young Cascades could not hold the lead in the second and eventually fell to UBC, 68-61, in the Canada West semifinal. Playing the next day for the conference bronze medal, the University of Winnipeg Wesmen defeated the Cascades, 90-84.  The Cascades finished the 2013 season with a 14-13 record (12-10 regular season, 2-3 playoffs) for a 52 percent winning mark.

Freeman, a guard, has been the heart and soul of the men’s basketball team, along with Grewal.  Freeman has grown each year alongside the program, from the team’s first post-season berth in 2010 to their second straight Canada West Final Four appearance. He led UFV in scoring with a 21.2 points per game, second best in Canada West.  He broke the school single-game scoring mark on January 18 when he scored 41 points against the University of Calgary, in an 88-84 loss. 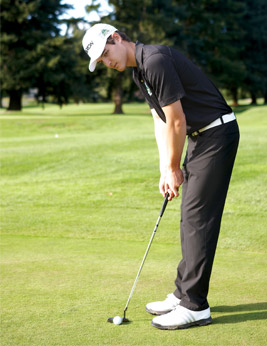 The men’s golf team won their fourth Pacwest title under the leadership of head coach Chris Bertram. UFV narrowly defeated Camosun College Chargers for the Pacwest championship on the final putt of the regular season. Aaron Pauls finished the 2012 Pacwest regular season as the silver medalist with a four-tournament score of 583, narrowly missing the overall title by five strokes. Pauls, who was named to the Pacwest all-conference team, was instrumental in the Cascades’ comeback to win the Pacwest title. He shot a remarkable 138 for the two-day event to lead UFV to a two-way tie with Camosun College. It was Pauls’ putt on the final hole that clinched the Pacwest title for UFV.  He was also selected a first-team CCAA All-Canadian.

With 11 student-athletes named to either the Canada West or Pacwest all-star teams, one conference player of the year award, two national awards and one conference coach of the year, the Cascades had a very successful year representing UFV.

The Cascades have now had two straight record-breaking years and with 120 of the 140 student-athletes returning next September, the expectations are high for another banner year in 2013/14.

The UFV Cascades are members of Canada West (CIS) and Pacwest (CCAA) with 140 student-athletes participating on nine varsity teams in men’s and women’s basketball, rowing, soccer, volleyball, and men’s golf. UFV Athletics plays its home games in the Envision Athletic Centre (Abbotsford, BC), and Exhibition Field and Chilliwack Golf & Country Club (Chilliwack, BC), and rows at the Fort Langley Rowing Club (Fort Langley, BC). Follow the Cascades on Twitter @UFVCascades and Facebook (UFV Cascades Athletics) or visit the department’s website at ufvcascades.ca.

This article was written by UFV Athletics Director David Kent and is is featured in the June 2013 issue of UFV Skookum magazine.