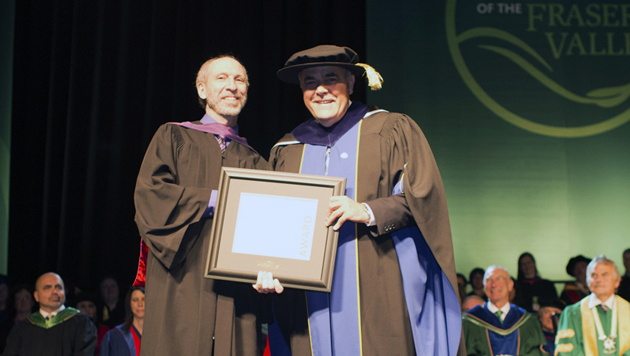 The University of the Fraser Valley has been through a lot of changes over the past few decades, and Dr. Darryl Plecas was around for most of them.

In 2006, he was selected to be the first occupant of the RCMP Senior University Research Chair at UFV, and from 2006 until recently he was Director, Centre for Public Safety and Criminal Justice Research at UFV. He received UFV’s Teaching Excellence award in 2001, and taught Criminal Justice 105, an introductory course, 105 times over the decades.

Plecas was also one of UFV’s most well-known faculty members, regularly featured in the media for his work and his expert opinion on local, national, and international news stories.

Now it’s time for Plecas to make some changes of his own. Recently elected as MLA for Abbotsford South, he will be retiring from his faculty position at UFV this year. In addition to his MLA duties, he was recently appointed parliamentary secretary (for crime reduction) to the Minister of Justice and Attorney General.

But the university wasn’t quite ready to say a final goodbye to someone who has been a core part of its development for 34 years. So Plecas has been named a professor emeritus at UFV, an honour reserved for faculty members who have provided both long service and exceptional contributions to the university.

When presenting the award to Plecas at the June 14 morning Convocation ceremony in front of nearly 2,000 graduates, faculty, family, and friends at the Abbotsford Entertainment and Sports Centre, Dr. Eric Davis, UFV provost and vice-president academic, said: “The title of UFV’s strategic directions statement is Changing Lives, Building Community. And the title of our education plan is Students and Community. These twin commitments of UFV, to changing student lives and developing the communities of the Fraser Valley, are exemplified in the career of Dr. Plecas. Countless graduates of UFV would attest to the fact that he changed their lives.”

Professors emeritus stay connected to UFV as guest lecturers and members of committees.

Plecas is happy he won’t have to say a final goodbye to the place where he has worked for over half his life.

“I have always said that this is the single best place on earth to work,” he said. “The atmosphere was second to none. I’m happy to be a professor emeritus because that means I won’t really be leaving.”

He hopes that the university he has called home all these years continues to stay true to its students-first commitment.

“It has been awesome to watch how we have evolved since our beginnings, staying true to the values of serving and supporting students above all. So many people played significant roles in developing that identity for us, and to have been a part of that was a great experience.”

When his department developed a BA in Criminal Justice in 1992, they purposely built a degree that combined theory and practice, and responded to the needs of criminal justice agencies and employers.

“We recognized the role of the university in making the system better. It as a perfect fit for met and the type of applied research that I and my department wanted to pursue.”

Over the years Plecas was involved in more than 200 research projects in partnership with criminal justice agencies.

“The Abbotsford Police Department say that every major initiative they have launched was influenced by work we did in partnership with them. The approach we took was to ensure that our research was connected to our community, whether it be local, provincial, national, or international in focus. In many cases research we did locally allowed agencies from around the world to learn and use the information in their own jurisdictions.”

Ensuring that students were involved in his research projects was a key part of his focus.

“I looked at our research projects as great opportunities for students and would always consider the question of how it would help our students when I considered taking a project on.”

Plecas’s first two degrees were in criminology, but his doctoral research was focused on the theory and application of education.

“I feel very good about some of the student-focused initiatives I was involved in, including implementing a student success course as a mandatory part of our diploma and degree programs.”

And after three-and-a-half decades and teaching more than 5,000 students, he runs into alumni everywhere, especially working within the criminal justice system and academia. Many of his students have gone on to earn graduate degrees and doctorates, and now are teaching at universities themselves.

“My approach and philosophy has always been to not gate-keep or block people from having access to studies, but to give them a chance, and then work to inspire them and help them succeed, opening doors rather than putting up hurdles. I can’t tell you how many people we’ve helped who didn’t succeed at university at first and then went on to great success. They need someone in their corner cheering them on, and that vastly increases their chances of success.”

In his new role as parliamentary secretary (for crime reduction) to the Minister of Justice and Attorney General, he will be working to implement many of the basic tenets of crime reduction that he has been researching in partnership with criminal justice agencies for year.

And since he’s MLA for one of the ridings that UFV calls home, and now a professor emeritus, he expects to stay closely connected to the university.