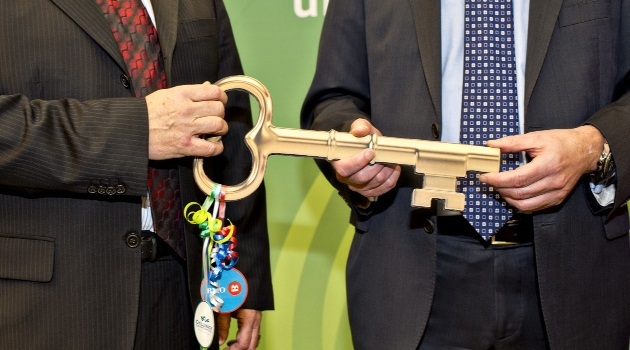 UFV will be a major presence at Five Corners in downtown Chilliwack thanks to a major gift from the BMO Bank of Montreal. BMO Financial group donated its building at the historic Chilliwack location to UFV in early 2013.

The university will renovate and refurbish the facility in order to create UFV Five Corners, a downtown education centre with a focus on programming related to business development and training.

BMO Financial Group donated the land and building, valued at approximately $850,000, to the university. The Chilliwack Economic Partners Corporation (CEPCO) is providing $650,000 to renovate the building, bringing the total value of the project to approximately $1.5 million.

“At BMO we see this donation as a triple win.  Not only does the use of our former branch building assist the university in its goal to launch a downtown business learning centre, it aligns nicely with CEPCO’s mission to stimulate economic partnerships and activity in the region.  We also foresee the exceptional value of UFV Five Corners as a centre of business learning — for small to medium-sized businesses clients and for the all-important agribusiness sector,” said Dean Kirkham, Vice President, Commercial Banking, BMO Bank of Montreal.

Once the renovation is complete the UFV Five Corners education centre will include classrooms, a boardroom, and office space for UFV instructors and staff.