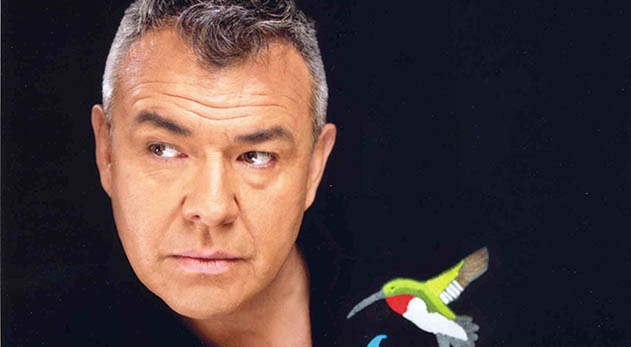 Prolific and colourful. Vibrant artworks infused with Aboriginal influence but with his own contemporary twist. When you see George Littlechild’s work you won’t soon forget it.

The Cree artist, originally from Alberta but now living in British Columbia, has built both a strong reputation and a huge catalog of work over the 25 years he’s been pursuing his muse since graduating with a Bachelor of Fine Arts from the Nova Scotia School of Art and Design.

Soon he will have another credential to hang on his wall: an honorary Doctor of Literature degree from the University of the Fraser Valley. He will receive his degree at UFV’s convocation ceremony for its College of Arts at 9:30 am on Fri, June 14 at the Abbotsford Entertainment and Sports Centre. The public is welcome to attend this free ceremony.

Littlechild has been compelled to create since he was a literally a ‘little child’.

“My foster mother saw that I had a talent at a very young age. She was encouraging, loving… She saw the gift in me,” recalls Littlechild on his website biography. “Scribblers were filled; art lessons began at an early age.”

“My role as an artist was chosen for me before I was even born. It is my passion, my joy, as my art has been there throughout my life’s journey!”

Even though he was artistic from birth, he credits two women for setting him on to the path of being a professional artist: his foster mother for seeing his talent and supporting it with art lessons, and a co-worker at a rehab facility when he was in his 20s who gave him the kick in the pants he needed when she said: “Why aren’t you doing art? You’ve got to get to art school!”

Littlechild didn’t grow up with any awareness of his culture or heritage, yet when he started to create art, something inside him compelled him to use the bright vibrant colours of the Cree people from whom he was descended.

“I have an innate blood memory of my culture, it seems. I was born using those colours. As soon as I could grab crayons, those were the colours I gravitated to.”

“My art is charged with energy and color, vibrant, magical, and thus enabling the soul to travel. I envision, I rely on the intuitive, the spiritual, the emotional. To tell stories through my art. I am a storyteller, a visualist. A conveyer of messages,” he says in the artistic statement on his website.

Part of a large-scale scoop of aboriginal children from their home communities into white adoptive or foster families in the 1950s and ’60s, it wasn’t until his he was in his twenties that he reconnected with the Hobbema community that his birth family came from, and met aunts and uncles, and siblings he never knew he had. Unfortunately, his birth parents had died before he could meet them.

As his cultural and political awareness grew, his art evolved to reflect his changing consciousness.

“We talk about Idle No More these days, but I’ve never been idle,” he jokes. “I’ve been thinking about and creating around these issues for years and years. I’ve always believed in being proactive and making changes for the better of the planet. I’ve been granted this gift of artistic ability and I believe in using it in the right way.

“If I were asked what kind of art I create; I would answer by saying that it is art that speaks from the heart, the social and the political,” he notes.

Littlechild has exhibited around the world, and had numerous solo and group exhibitions as he generated hundreds of works of art, many of which have been snapped up by public and private collections. His books and art have won numerous awards & scholarships.

This is Littlechild’s introductory comment in his book This Land Is My Land: “In Indian Country we are reviving our culture and traditions. Working as an artist is my way of healing the pain of the past and helping the next generation of Indian people. My goal is to heighten awareness of the history and experience of Native Peoples of the Americas and to promote understanding among all peoples.”

Along with being true to his aboriginal heritage, Littlechild also believes in living with a positive attitude.

“Life has its ups and downs. But everyone should do what they believe in, and believe in what they do. There will always be downfalls, but eventually it gets easier.”

These days, he’s enjoying promoting his latest book: The Spirit Giggles Within.

As for receiving an honorary degree, it’s not something he ever envisioned happening to him, but he’s delighted to be recognized.

“When I first got an email asking me to get in touch with the university, I had no idea why they were contacting me. I was totally shocked and surprised!”