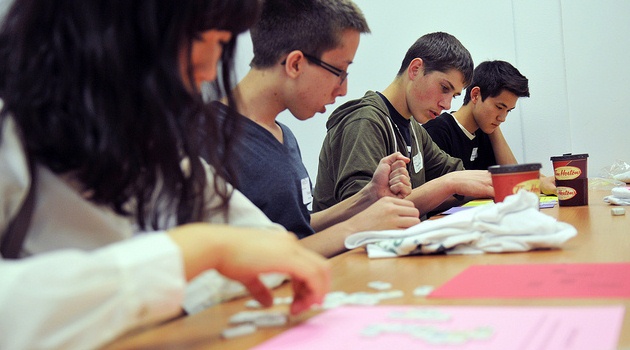 The region’s best and brightest young mathematical minds set to work at the University of the Fraser Valley’s annual B.C. Secondary Schools Math Contest recently. More than $14,000 in scholarship money was up for grabs, with 146 students representing 26 schools — an increase over last year’s 108 students from 19 schools.

When the eraser dust settled, Yale Secondary students Geon (Liam) Kim and Sungil Ahn earned the highest marks in the junior and senior categories, respectively. Ahn scored an impressive 94 on the test, including a perfect score on the multiple choice and 44 out of 50 in the long answer section. Second-place senior Ji Sup Kim (Yale Secondary) scored 67, followed by Jeffrey Lin (Abbotsford Christian) with 56.

The average score in this year’s contest was 34.8 for juniors and 27.03 for seniors.

For the second consecutive year, the four-person Bantam (Grade 8 and under) team competition was won by Clayburn Middle school’s Zachary Funk, Mitchell Dombrowski, Jacob Child, and Harry Ryu, who scored 40 out of 50 on the multiple choice questions, and three out of 50 on the long answer section for a total of 43.

“Mathematics is the language of science, so we can expect these kids to become tomorrow’s doctors, engineers, climatologists, and teachers and researchers of math and science,” said UFV math instructor Ian Affleck.

“What we as educators actually enjoy most is to see their appetite for the enrichment activities in the afternoon sessions, where they see math in places they didn’t expect, and often get the chance to work in teams to solve puzzles. Personally, I believe that the afternoon recreation, not the contest itself, is the greatest reason for the success and continuing growth of the event.”

Full results are as follows: