As far as working relationships go, you could say UFV’s connection to Ipex is as solid as a cast iron pipe.

Or better yet, XFR.

Don’t worry if you don’t know the latter, it’s still new in the plumbing world ­— but it could be coming into walls and floors around you following a study conducted by plumbing and piping students inside UFV’s Trades and Technology Centre. 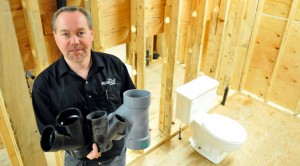 While ABS is light, it’s not fire rated like the other two. Traditionally, cast iron is used for main plumbing pipes, as it’s solid, quiet, and fire rated. But a new product, XFR, is coming into the industry.  Lighter, fire rated, and easier to work with than cast iron, the only question remaining is how much noise is generated when water rushes through.

This summer, Ipex is coming to UFV’s Trades and Technology Centre to conduct their own sound study using decibel measuring devices even more sensitive than UFV’s machines, which found ABS levels to be about six decibels louder than cast iron and insulated XFR, which were both equally quiet.

“We want to know which was better, cast or XFR. What we’re doing is giving our students a head start on a new product.”

UFV’s relationship with Ipex goes back several years, with the company providing regular tours of its Langley facility to give students a better understanding of materials they’ll use throughout their careers.

“Ipex is always interested in expanding the knowledge of people in the trade.”

Buoyed by decibel tests that could reveal what’s coming down the pipe, it’s safe to say UFV’s plumbing students are flush with answers like never before.