They brought more than 200 years of combined experience with them to the gathering as UFV celebrated employees with 25 or 35 years of experience on April 18, 2013.

They started their post-secondary careers at a small community college, helped build it into a degree-granting university college, then pitched in with a further transition to full university. 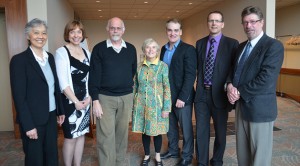 English instructor Virginia Cooke addressed the gathering in her role as Faculty and Staff Association president, acknowledging that is was a bit of a conflict of interest to be congratulating herself on long-term employment.

“We’ve spent more than half our lives here as employees and often run into people who say, ‘are you still here?’ implying that we should have been able to come up with something better by now,” she said. “In our 25 or 35 years, we’ve been through a lot together, formed lasting friendships and carefully nurtured enmities, experienced campus moves, divorces, and email upgrades…. We’ve lost our hair naturally, or pulled it out in frustration. We’ve gained weight and experience, and mellowed with maturity. We’re richer in experience, if not in the monetary sense. Our accumulated wisdom is humbling!”

President Mark Evered thanked the long-term employees for serving many thousands of students over the years and helping to build the university.

“You’ve led us through tough times and served as great mentors and guides.”

Members of senior administration spoke about each honoree.

Dean of Arts Jacqueline Nolte spoke about Virginia Cooke, who was hired in 1978 as a freshly minted PhD from Queen’s University.

“It was noted that her energy and spirit would be an asset to Fraser Valley College, and it certainly has been!” said Nolte, noting that Virginia’s contributions to the university over the years, in addition to teaching, have included being a thespian (acting in several UFV Theatre productions), co-chairing the Writing Across the Curriculum committee, serving two stints as president of the FSA (two decades apart), five years as Dean of Arts, and volunteering in the Writing Centre.

“She has served and built the community that is UFV.”

Diane Luu has educated generations of students in a variety of disciplines over her three-and-a-half decades at UFV.

Her specialty, which has evolved with the university, is reading and study skills, and she has taught courses in this discipline to aboriginal and international students, and those enrolled in Human Services, Career Technical Centre programs, and Business Admin.

She has been involved in recruitment, orientation, assessment, and the development of the Bachelor of General Studies..

Craig started at UFV (then Fraser Valley College) as a microcomputer technician in 1988, and has spent half his life with the university. When he began he was one of only to employees in the IT department (along with the late Terry Cox). As the department grew he took on leadership roles, and eventually moved over to Facilities as director.

As executive director of Campus Planning and Facilities, Craig has truly been a campus builder. Over the last several years, he has overseen the construction and/or renovation of the following projects:

Baker House Residence
Retrofit of former Trades Centre for Visual Arts and School of Business
Cafeteria and classroom renovation
Extreme makeover of the former Canadian Forces Base engineering school into Building A on Canada Education Park.

He has also been involved in various leadership roles and committees in the community, as well as pursing a bachelor’s degree, and now an MBA.

“Craig truly has played a key role in building the university,” said Jackie.

Jim Strachan has been a fixture on the Chilliwack campus since the late 1980s as a janitor, and made the move to the CEP campus last summer. He even spent some time cleaning at the former Portage Avenue location of UFV, where Carpentry and Health Sciences were based until 1992. That’s where he met his partner Jody Cameron, a longtime theatre staffer who has been retired since 2004.

He is well-known to students and employees alike as a thoughtful, helpful, intelligent and articulate denizen of the evening hours at UFV. He was also one of UFV’s first students, back in 1976.

“Jim is a dedicated and loyal member of the janitorial team,” noted Jackie. “He is always willing to go above and beyond the call of duty and handle crises. And if you ever need to know what’s going on at the Chilliwack campus, ask Jim.”

Kim was also one of UFV’s first students back in the Fraser Valley College days, starting in 1976. She was a student assistant in the library in 1978. She eventually went on to UBC to earn her MLS, and then returned to UFV as a popular instructor, and eventual department head, in the Library and Information Technology department.

She did a stint as union president, and eventually became director of the library (now known as university librarian).

“Kim’s staff reports that she is so nice that in their performance evaluations, they can’t tell if she is pointing out a shortcoming or giving a commendation. She is very solution-oriented, and she is my role model,” said Eric.

Harv McCullough has served UFV in several roles since being hired as a carpentry instructor in 1978. He became trades coordinator in 1985, trades director in 1988, and Dean of Trades and Technology in 1998. After stepping away from the dean’s role at the end of 2011, UFV president Mark Evered asked him to take a temporary posting as VP External.

“Harv is known as a creative financier, frugal, an early riser who gets up at 5 am to plan the day, and, in two simple words conveyed by his trades colleagues: ‘Coors Light,’” said Eric. “He certainly put his creativity to use in making the very successful suggestion that a Graphic Design program would be a good fit for our Mission campus.”

“Much of Harv’s work is done behind the scenes and is invisible, but when you pull the curtain back you’ll see successes like the $1 million promised by the provincial government this week for our Agriculture facilities, and the Bank of Montreal donation of their downtown Chilliwack building to us. He is very good at building community relations, and that’s exactly what we need in a VP External right now.”

Harv McCullough paid tribute to director of Ancillary Services Cameron Roy, a bibliophile who started out working in the UFV library before becoming bookstore manager and eventually taking on all ancillary services.

He praised Cameron for holding steady at the helm of food services, a function dear to the heart, or stomachs, of many UFV students and employees.