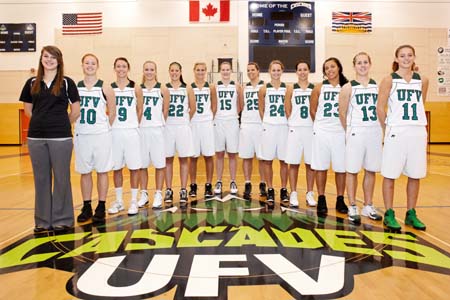 The UFV Cascades are participating in their first Canada Interuniversity Sport women’s basketball Final 8 national championship tournament and will face the AUS champions Saint Mary’s University Huskies in the first round on Friday at 8:30pm MST (7:30 PST). The CIS is the elite university athletic association in Canada.

“Making our first appearance at the “Final 8” is another accomplishment and another first for this team,” commented head coach Al Tuchscherer.

Led by Tuchscherer, who is in his 11th year at the helm of UFV, the team has been able to make the transition from CCAA college level ball to the CIS an easy one. Tuchscherer, like most very active coaches in the community, is one of the founders of the Junior Cascade program, where junior and high school level student-athletes can hone their skills in preparation for participating in CIS women’s varsity basketball, the highest level of amateur basketball in Canada. The present UFV Cascades lin up are no strangers to Coach Tuchscherer as seven of the 12 on the roster have gone through the program. While the Cascades will be the “rookies” at the CIS Final 8 tournament (their first appearance) the key to the team’s success is that the nucleus has been together since high school playing various levels of ball as a unit.

Led by second team Canada West all-star Aieisha Luyken of Mission, who was top scorer with 356 points for a 13.2 points per game average and Sarah Wierks, Chilliwack, with 340 points (12.6 ppg) and 260 total boards (9.6 rpg), Coach Tuchscherer has many weapons and very deep bench to go to in a short tournament, like the three-day CIS Final 8 event. Seven different players averaged four or more points per game, six different Cascades led UFV in scoring during the regular and post season, seven different Cascades led in rebounding, and in 12 regular season games every Cascade scored two or more points. The Cascades “trademark” is defense.2 times this season they held their opponents to under 10 points in a quarter, twice holding their opponent to under 20 points at the intermission. UFV’s tenacious defence forced their opponents to commit 580 turnovers in 22 regular season games.

The Cascades are no stranger to the University of Regina Cougars’ home gym, as they have played at U of R three times this 2012/13 school year. The Cougars hosted two different preseason events this year. UFV participated in both coming away with a 4-2 record including victories over Carleton University (OUA East champions) 59-58 and the host Cougars (Canada West Champions) 77-72. In the regular season UFV lost a “nail biter” to the Cougars 59-55 on December 1. The Cascades are ready for the challenge of their first visit to the CIS elite women’s basketball tournament with 10 veterans and two rookies and great chemistry the program’s future is bright and this weekend is just another positive step in this growing program’s history.