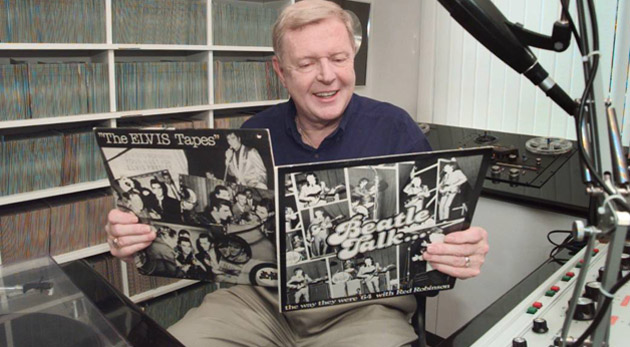 Red Robinson has been a rock ‘n’ roll music pioneer since the 1950s.

Red Robinson is returning to the University of the Fraser Valley in April, this time in Mission.

UFV president Mark Evered, partnering with the Mission Chamber of Commerce, welcomes the legendary Robinson to the Clarke Theatre adjacent to UFV’s Mission campus at Heritage Park Centre, on Tuesday, April 9, at 7 pm. Admission is free to this event, part of the President’s Lecture Series, and the public is welcome.

Red Robinson is a living museum of popular music and culture.

What started as a teenaged passion for Robinson — spinning rock ’n’ roll records on a local Vancouver radio station while still in high school — has turned into a six-decade career in the entertainment business.

In his career in radio and television Robinson has met and interviewed many of the influential names in the entertainment business.  In 1957, he was the MC of the Elvis Presley show at Vancouver’s Empire Stadium. In 1964, he welcomed the Beatles to Vancouver.

Over the years, Red met and worked with countless major popular recording stars and taped interviews with over 650 personalities.

Red Robinson is still active in the BC entertainment industry, often greeting stars of yesterday and today as they perform at the Red Robinson Show Theatre in Coquitlam, playing DJ Sunday afternoons on AM 650 and making television appearances.

For his pioneering contribution to the Canadian music industry, and his philanthropic work with the CHILD Foundation and the Heart and Stroke Foundation and other charities, Red received an honorary doctorate from the University of the Fraser Valley in 2012.

As part of his commitment to the University, Robinson will be returning to the Fraser Valley to share some of his stories and playing music clips with UFV’s CIVL radio station manager Aaron Levy.

Throughout his long career in radio and the entertainment industry Robinson has adhered to a belief in positive thinking.

As Robinson stated at UFV’s convocation ceremonies, “you need to believe in yourself. Babe Ruth had the most home runs ever, but do you know who had the most strikeouts? Babe Ruth! You have to go to bat and swing if you want to succeed!”

He is sometime incredulous that what started as an offshoot of rebel youth culture has turned into a multi-billion dollar industry, and is proud of the role he played in establishing the entertainment industry in Canada.

“To bring Red to our Mission campus and invite the community to join us is thrilling,” said Evered. “Red demonstrates that by following your passion each of us can work to change lives and build community.”

Students, faculty and staff, members of the community, and alumni are invited to come to this free evening event with Red Robinson and radio host Aaron Levy. Bring your questions and be prepared to be entertained.

For more on the President’s Leadership Lecture Series, visit www.ufv.ca/president/lecture-series/.