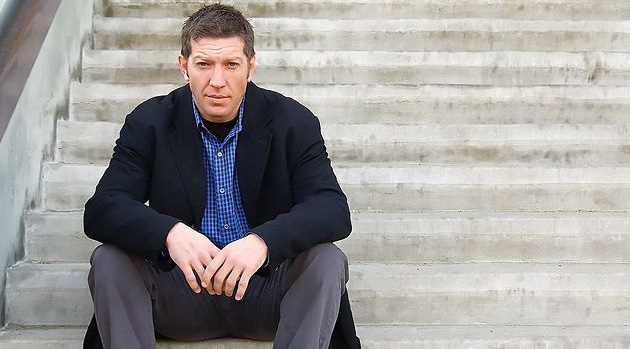 Sheldon Kennedy is returning to UFV to bring his personal message of empowering individuals to stand up to bullying and abuse on Pink Shirt day. Kennedy will be featured on Wed, Feb 27 as part of the President’s Leadership Lecture Series at 4:30 pm in the lecture theatre (room B101) at the Abbotsford campus.

The former pro hockey player was the first to accuse coach Graham James of abusing junior hockey players, which led to a conviction and, eventually, further charges. Kennedy chose to ‘out’ himself as a victim in order to expose a problem that had been hidden away in sport. Since then he has devoted his professional life to abuse prevention and education.

Kennedy believes “by educating everyone on the prevention of abuse, bullying and harassment, we are deputizing each person with the necessary tools to intervene and/or report inappropriate behavior whether it’s in sport, schools, or the workplace. When everyone is on the same page we are more likely to feel comfortable and confident with these issues and speaking up.”

In recognition of his bravery and ongoing work to prevent abuse, bullying, and harassment, UFV conferred an honorary doctorate on Kennedy in 2012. As he spoke from his heart to the graduating class, he also committed to return to UFV to continue to share his message of personal empowerment with others. President Mark Evered is thrilled to welcome Sheldon Kennedy and his business partner Wayne McNeil back to UFV.

“To have Sheldon at our university on Pink Shirt day is an incredible opportunity,” said Evered. “Sheldon is one of the most recognized names in the fight against bullying and he symbolizes how each of us can work to change lives and build community.”

Kennedy’s visit to UFV puts the spotlight on students, faculty, and staff and how they can work together to say no to bullying and abuse. A coalition of students and resource groups at UFV are promoting Pink Shirt day. On Feb 27 their displays and activities will be centered in Alumni Hall above the lecture theatre at the Abbotsford campus and in the atrium at the Chilliwack campus. Kennedy will be making an appearance at Alumni Hall before heading at 3:30 pm to the UFV Bookstore on the Abbotsford campus (1385 Mackenzie Road) for a book signing of his story Why I Didn’t Say Anything.

Those planning to attend the lecture are welcome to arrive early at the bookstore to meet Sheldon in person. UFV welcomes members of the public as well as students, alumni, faculty and staff of to wear pink in support of anti-bullying and to attend any of the Pink Shirt day activities. All proceeds from the sale of pink merchandise at UFV to go towards the Student Emergency Fund. To learn more about the message of “Empowering the Bystander” and the Respect Group Inc. visit http://respectgroupinc.com.