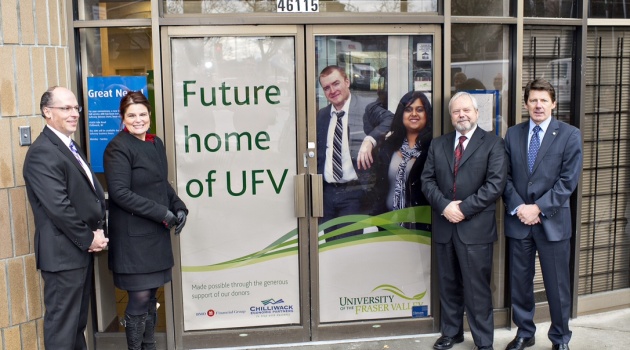 CHILLIWACK, BC, December 7, 2012 — In what will be the largest donation it has ever received, the University of the Fraser Valley will take ownership in early 2013 of the former BMO Bank of Montreal branch building at historic Five Corners in downtown Chilliwack.

The university will renovate and refurbish the facility in order to create UFV Plaza, a downtown education centre with a focus on programming related to business development and training.

BMO Financial Group will donate the land and building, valued at approximately $850,000, to the university. The Chilliwack Economic Partners Corporation (CEPCO) will provide up to $650,000 to renovate the building, bringing the total value of the project to approximately $1.5 million.

BMO has been serving customers in Chilliwack for over 106 years.  The branch had been at the Five Corners location over this time, but in different buildings.

“BMO Bank of Montrealwas very pleased to open a new Chilliwack branch at Eagle Landing in October, 2012 with an investment of $1.7 million,” said Henry Donkers, Vice President, Personal Banking, BMO Bank of Montreal.  “Our employees are excited to be offering the full range of financial services in up-to-date premises, six days a week.”

“At BMO we see this donation as a triple win.  Not only does the use of our former branch building assist the university in its goal to launch a downtown business learning centre, it aligns nicely with CEPCO’s mission to stimulate economic partnerships and activity in the region.  We also foresee the exceptional value of UFV Plaza as a centre of business learning — for small to medium sized businesses clients and for the all-important agribusiness sector,” said Dean Kirkham, Vice President, Commercial Banking, BMO Bank of Montreal.

The City of Chilliwack is supportive of this initiative as part of its commitment to revitalizing the downtown core.

“I truly appreciate BMO’s reinvestment in the downtown core demonstrating mindful corporate citizenship. This will add to UFV’s visibility and influence in the City and continues the positive momentum for the new downtown direction,” said Mayor Sharon Gaetz.

Once the renovation is complete the UFV Plaza education centre will include classrooms, a boardroom, and office space for UFV instructors and staff.

Renovation work will begin in the new year, with the UFV Plaza expected to open in September 2013.