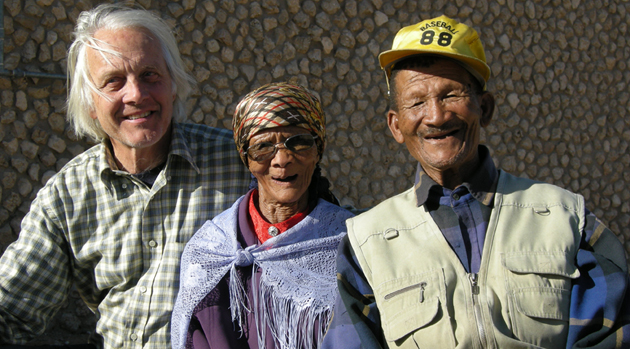 Anthropologist, writer, and filmmaker Hugh Brody has been working with the  ‡Khomani San, otherwise known as the Bushmen of the southern Kalahari, since 1996. His new DVD, Tracks Across the Sand, was made over 12 years, documenting the resilience of a people who were previously dispossessed of land and identity.

The University of the Fraser Valley is hosting the world premiere of the DVD at its new Chilliwack campus on Fri, Nov 30, at 7 p.m. This free event will be held in the Black Box theatre, Building A at Canada Education Park, 45190 Caen Ave, Chilliwack. Please RSVP before Nov 27 to yvette.fairweather@ufv.ca
Please RSVP before Nov 27 to yvette.fairweather@ufv.ca .

The DVD will also be shown on at 8 pm on Mon, Dec 3, at the Norman Rothstein Theatre, 950 West 41st Street in Vancouver.

Tracks Across the Sand follows the process leading up to the first indigenous peoples land claim in Africa and examines the results of that claim today and its potential for the future.  It looks in detail at the effort to rediscover and revitalize a people who had been so crushed as to be deemed to be extinct.
When Thabo Mbeki,  then president elect of South Africa, signed an agreement in 1999 that gave 45,000 hectares of farm land to the surviving ‡Khomani, along with a further 25,000 hectares of land and extensive hunting and gathering rights within the Kglagadi Transfrontier Park, he undid one of the great travesties of South African history. Previously oppressed, dispersed and impoverished, these people were now free to return home.

At the request of the San people, Brody has documented the language, maps, historical photographs and oral history. The film captures the speech of a woman who thought she was the last living person to speak her language, follows the first families as they visit their homes and gather herbs in the areas forbidden to them since the 1930s, as they adjust to living in new villages in the Kalahari.

According to Brody, “This film is only the beginning. Our next task is to facilitate a secure and accessible archive where the entire body of material will be held for present and future generations.  The Rock Art Research Institute at the Origins Centre at the University of the Witwatersrand has agreed to partner in this undertaking, to hold the original materials and assist in the development of a full digital database prepared for web access. It is my hope that the University of the Fraser Valley (UFV) will provide a research platform in North America, and play a large part in design of elements of web based access to the materials.”

Hugh Brody’s contributions to seeking change and justice for aboriginal communities began in the1970s with the Land Use and Occupancy studies of northern Canada, and as an expert witness for the Mackenzie Valley Pipeline Inquiry and the Treaty 8 land claims.  Educated at Oxford and an Honorary Associate of the Scott Polar Institute at the University of Cambridge, Hugh Brody now holds a Canada Research Chair in Aboriginal Studies at the University of the Fraser Valley. He has made documentaries with and for Aboriginal peoples in many parts of Canada, including  Gitxsan, Nisg’aa and Mowachat –Muchalaht First Nations as well as films about two British artists, Henry Moore and Antony Gormley.  His books include The People’s Land, Maps And Dreams and The Other Side of Eden. He has also worked with tribal peoples in India and northern Scandinavia.

Want a new experience? Short-term study opportunity in Wuhan, China
Do you know a great UFV teacher? Nominate them!