The opening production of the UFV  Theatre department’s 2012/13 season of theatre will be Once in a Lifetime, the hilarious comedy from George S. Kaufman and Moss Hart, which follows the progress of a trio of failing vaudevillians who attempt to boost their chances of employment by working as elocutionists in a 1920s Hollywood that is in the process of switching from silent movies to the talkies.

Once in a Lifetime is a full-blown extravaganza, filled with a host of crazy characters and farcical situations that are guaranteed to tickle the funny bones of the most discerning theatre patrons. If you liked the Oscar winning movie The Artist, and the classic Singing in the Rain, you’ll love Once in a Lifetime, which is the epitome of feel -good entertainment. 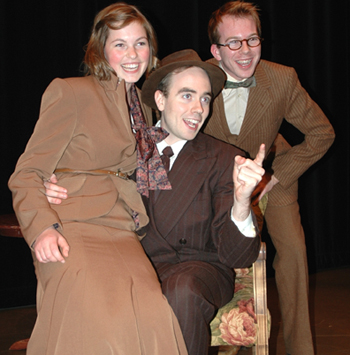 Danielle Warmenhoven, Eli Funk, and Thomas Smith in UFV Theatre’s Once in a Lifetime.

Director Ian Fenwick has assembled a large cast of UFV Theatre students for this production, with many cast members playing several roles.

Set and lighting design for Once in a Lifetime is by Astrid Beugeling, with costumes co- designed by Heather Robertson and Catrina Jackson. Projection design is by Julie Ruffell with props design by Aaron Froc  and sound design by Stephen Wilhite. Stage manager for this production is Nicole Janisch.

Season tickets are still available for the 2012/13 season, including:  Ernestine Shuswap Gets Her Trout by Tomson Highway and Shakespeare’s The Merchant of Venice.

Once in a Lifetiem, Theater, Theatre