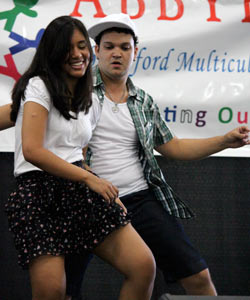 For the fifth year in a row, the UFV fashion show and world culture garden were highlights at Abbyfest, Abbotsford’s annual multicultural festival held at Rotary Stadium.

“We featured more countries than we have ever done before,” says volunteer coordinator Prashant Wadhani, who is a third-year UFV student in Business Administration. “Ten countries participated in the world culture garden and seven performed on stage. Altogether the event involved more than 70 UFV volunteers.”

The stage performance included Chinese and Japanese fan dances, a lotus dance from Vietnam, salsa steps from Brazil, and spirited choreographics from Africa, the Dominican Republic and Mauritius. Performers from these countries also exhibited in the culture garden, adding their displays to those from Korea, Saudi Arabia, and India.

“For me, the highlight of Abbotsford’s multicultural festival has always been the fashion and dance show put on by UFV students,” says UFV Modern Languages department head and former member of Abbyfest’s Board of Directors Betty-Joan Traverse. “The stunning traditional costumes from a wide variety of countries and the students’ positive energy provide joyful proof of the advantages of diversity and cross-cultural understanding.”

“All the UFV volunteers put a great amount of time, hard work and dedication to make the event a success,” says Wadhani. “I’ve helped with Abbyfest for the last three years and this was our best performance to date. Everyone really enjoyed themselves and showed great team spirit.”