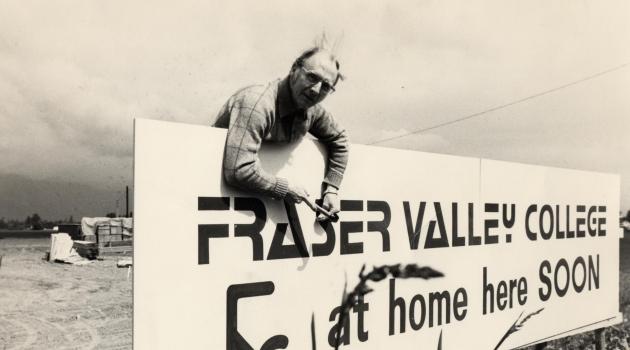 Ever since the days of Fraser Valley College and a ‘college without walls’, the Chilliwack community has had a strong connection to UFV.

Before the college even had any facilities to call its own, it ran its first classes in church basements in the daytime and Chilliwack Secondary in the evenings.

For many years, people have referred to the oldest building on the UFV Chilliwack campus on Yale Road as “the motel”. It opened in 1975 as the first phase of the Chilliwack campus and was only supposed to be in use by the college for five years.

Not many people, however, know why it was called the motel. Many mistakenly believe that it was once a motel that was converted into a college campus, or that it was built as a motel and the college swooped in at the last minute and turned it into a college building.

Some local developers owned the prime piece of property at Yale and Airport Road, and offered to put up the building and lease it to the college for a few years. The thought was that after the college was done with the property, it could be converted into a motel. Thus the nickname.

“Larry Blake had been involved in college start-ups before, and he knew what we needed,” recalls Bate. “He worked with the architects to design a very basic building with a library, classrooms, cafeteria, and open meeting place. It was a very inexpensive building, not built for the long-term at all. Larry would be amazed that it was still in use after almost 37 years. It was meant to be temporary quarters.”

A few years after the building opened in 1975, the provincial government decided to buy the land at Yale and Airport for a long-term home for the Chilliwack campus. So the college went from being tenant to landlord of theYale Roadcampus.

More buildings followed: the basic agriculture building in 1987, and the health sciences centre in 1992.

“It’s unfortunate that the Chilliwack Yale Road campus wasn’t done in a comprehensive manner, instead of the piecemeal approach that happened,” says Bate.

Eventually, funding was secured for what was to be the building of a “long-term” Chilliwack campus. The classroom complex (Building D), performance theatre, and student services building (Building E) opened in 1995. (This allowed for the demolition of portable classrooms out back).

A new administrative/library building to replace the “motel” was designed and was slated to immediately follow construction of the Building D classroom complex, but it was put on hold for funding reasons in the mid-1990s. It was resurrected in the early 2000s, and new plans drawn that took into account the need to build high enough to be out of the flood plain, but died on the drawing board again in 2001 when the newly elected provincial government put a freeze on all new public post-secondary capital funding.

UCFV then entered a phase of actively pursuing the former Canadian Forces Base Chilliwack for a new Chilliwack campus. This led to purchase by the provincial government of 85 acres at what is now called the Canada Education Park for UFV in 2007, and the opening of a new Trades and Technology Centre there in a renovated building that same year.

Then came the extreme renovation of the former military building at the Canada Education Park into the new classroom and office complex that opened this week. The Yale Road campus is for sale. The UFV performance theatre will remain at the Yale Road location for the near future.

This article originally appeared in a UFV on the Move supplement in the Chilliwack Progress.