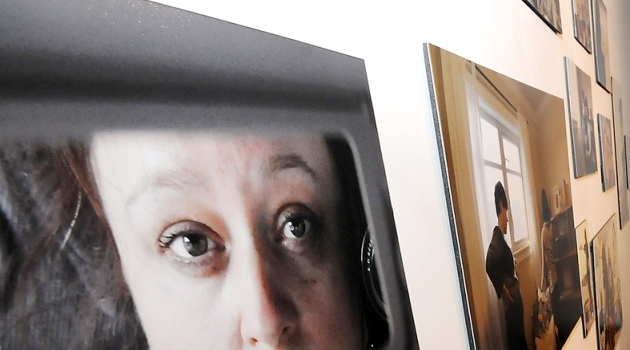 Eleven UFV students partook in the Lens of Empowerment project last year; four of them travelled to Loughborough University in England last month, and their work is once again on display at UFV next week.

After most classes ended in May, the work of one small group of students continued.

For the first time last year, UFV introduced a three-course project called the Lens of Empowerment.  The students worked with digital photography and video production, then used these skills to dive into specific topics related to women and identity in Stó:lō territory.

Eleven students were involved with the program, which ran from the beginning of Fall 2012 to the end of Winter 2013. (You can read more about the project here, and see the students’ work here.)

Instead, four of the eleven students and several UFV faculty members were off to Loughborough University in England to show the students’ art to the world.

The conference, titled Home/Land: Women, Citizenship, Photographies, explored similar issues to those were approached by the students in the Lens of Empowerment program.

Shirley Hardman, who is the UFV Senior Advisor on Indigenous Affairs, described it as an emotional experience as well as an educational one.

“It really gets you in the heart,” Hardman said, describing some of the lectures the UFV group attended. “The speakers were all talking about land that just isn’t there anymore — land that’s been appropriated.”

Three of the UFV students were funded through Loughborough University, and spoke on a panel about the seven-month experience they had with Lens of Empowerment.

Hardman says that the project exceeded all expectations.

Hardman says that they’d do another project along the same lines in a heartbeat.

The students’ art will be on display again this coming week as part of the Indigenizing the Academy conference, Aug 26–29. The gathering will involve representatives from over 33 institutions across Canada and will be held at UFV’s new building at Canada Education Park. The Lens of Empowerment exhibit will be on display outside the library from Sunday to Tuesday. For more information, contact Shirley Hardman at Shirley.Hardman@UFV.ca