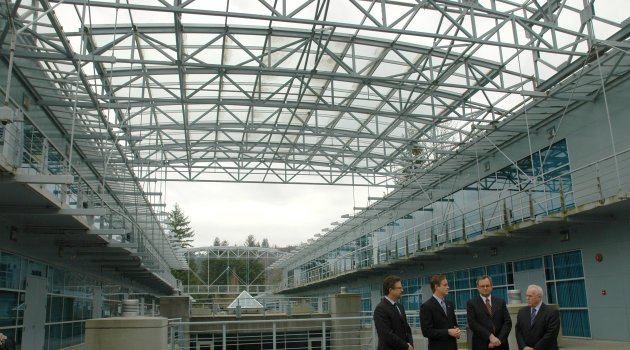 The new building at the Canada Education Park in Chilliwack that UFV opened this week isn’t exactly new, but it isn’t exactly old either.

It is a bold reimagining of what was an engineering school (built for that purpose but never used for that purpose) that was mothballed when the Canadian Forces Base Chilliwack was closed in 1997.

UFV inherited the building when it bought 85 acres of the former military base in 2006, and intended to renovate it as part of a larger project that would have seen a separate new building constructed as well.

But then the UFV campus planners got extra creative.

“We realized that we would get more value for the limited funds we have if we combined the renovation and the new construction into one cohesive building,” says Craig Toews, director of campus planning at UFV. “By putting our eggs into one basket we were able to make it all like one beautiful new building.”

It was a major overhaul to be sure. The engineering school was comprised of five buildings connected by an outside courtyard. UFV demolished part of the southern side of the complex and, using in-fill construction, knitted the four remaining pieces together under a magnificent atrium with architecture showcasing BC wood.

When asked what he’s proud of in the new building, Toews picks two themes:  how the vision for the campus is coming together in a building designed to foster community, and the sustainability aspects of the project.

“We really wanted to build community between the various departments and services and I think we will achieve that by having the central atrium with services such as food, coffee, bookstore, and admissions and records, student services, and the library right there, as well as beautiful and accessible outdoor spaces. People from different programs and services that were segregated in separate buildings will run into each other more on this campus.”

In addition to the community spaces in the common areas, Toews sees great potential in the aboriginal gathering place, which brings a modern touch to a traditional communal long-house design, with a sunken floor surrounded by layered bench seating, and a warm setting featuring BC wood. UFV received an additional $600,000 grant to include the gathering place in the new building.

There is more to the UFV campus at Canada Education Park than the new building. UFV has several other buildings in operation on the new campus. The Trades and Technology Centre is located just to the northwest of the new building. Agriculture and Continuing Studies will be housed in a building just to the south. And another building will be used for printing services, maintenance and storage. UFV will also continue to use its performance theatre on the Yale Road campus for the near future. There is also plenty of room to grow for the future at Canada Education Park.

The campus is also part of a ready-made university district. The Garrison Crossing area is several years ahead of UFV in terms of residential and commercial development, and the people there have been eagerly awaiting the development of the campus. Restaurants, a recreation centre, housing to rent and buy, a yoga studio, and hip new retail outlets are all within walking distance.

On the sustainability front, Toews emphasizes that this is will be a model campus.

“We will be using 60% less energy in terms of cost than we were using on our Yale Road campus,” he notes.

The building features an open-source geo-exchange system for heating and cooling of water, solar thermal systems on the roof for domestic hot-water production, light harvesting in the large public spaces (which will automatically dim the lights if it’s bright out) and storm waters systems to capture water for irrigation of the landscaping. Speaking of landscaping, most of the plants used are native to British Columbia and well suited to our climate.

The geo-exchange involves drawing water from the aquifer fed by the Vedder River and then replacing it after it has done its heating and cooling work.

Toews is also pleased with how the architects kept some sense of the old building and its military heritage in the linear design used throughout.

“They’ve really made use of long linear geometry throughout, extending right through to the landscaping, for a real cohesive design.”

This article originally appeared as part of a UFV on the Move supplement in the Chilliwack Progress.

Recognizing innovation and excellence: three employees honoured for going above and beyond.
Crunching some numbers: what went into the new building at Canada Education Park