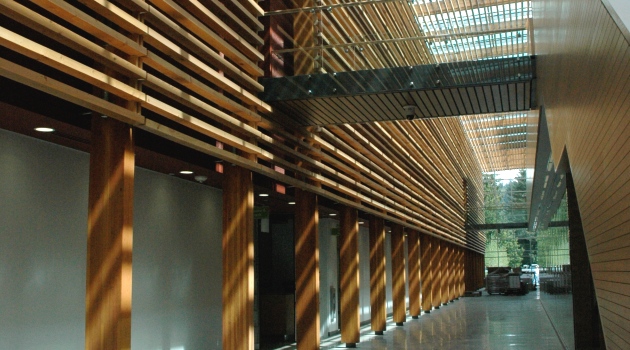 The University of the Fraser Valley has room to grow for decades with its big move to the Canada Education Park.

UFV owns 85 acres of land at the CEP, set adjacent to the Vedder River on the former Canadian Forces Base Chilliwack, which closed in 1997. On May 11, it officially opened the second building on its new campus at Canada Education Park (the first was its Trades and Technology Centre, which opened in 2007).

Extreme renovation has been the theme for UFV’s development at the CEP so far. After transforming a former military warehouse into a modern home for trades and technology programs in its first phase, UFV turned its attention to the former military engineering school.

Taking five separate buildings that surrounded an outdoor courtyard, architects designed a large new inside structure, demolishing a small part of the former building and integrating the renovated sections into one cohesive facility. The new building at Canada Education Park is a 150,000 square-foot facility that brings programs and separate from separate buildings at the Chilliwack Yale Road campus into one welcoming and warm environment.

Extensive open spaces and use of wood make for a striking indoor environment. It’s also cutting edge in terms of sustainability, and earned LEED Gold certification, which means it meets the highest sustainability standards, and follows the Wood First initiative, showcasing BC wood in its design.

The project was built at a cost of $41 million, with an additional $4 million going towards campus transportation and infrastructure development.   The provincial government provided UFV with $7.5 million in funding for acquisition of the 84-acre Chilliwack Canadian Forces Base site, $600,000 for the aboriginal gathering place, $10 million towards the major expansion and renovations of the new building at Canada Education Park campus, as well as $21.6 million to fund the major renovation of Building 1040, creating the new Trades and Technology Centre at the Chilliwack campus. A federal/provincial Knowledge and Infrastructure Program grant provided $7.22 million for infrastructure improvements. The remainder has been funded by UFV through its capital plan, which includes the future sale of the UFV Chilliwack North campus on Yale Road contributing to covering the cost of the development.

The new campus (including the current Trades and Technology Centre) will immediately provide space for 1,600 full-time equivalent spaces (400 at the TTC and 1,200 in the new building). The new building has the capacity to accommodate growth of 300 FTE to a total of 1,500, for a total of 1,900 FTE at the Canada Education Park campus.

UFV’s 30-year plan for the campus involves a dozen more buildings in this area to form a quadrangle design, for a 7,000 FTE count. This would use roughly half of the 85 acres UFV owns at the Canada Education Park.

What is Canada Education Park?

Canada Education Park is a multi-agency educational  partnership located on the former located on the former Canadian Forces Base Chilliwack, which closed in 1997. When the federal government closed the former CFB Chilliwack in 1997, University of the Fraser Valley and City of Chillwack planners and administrators, along with other partners, saw the potential for an educational focus for the property. The Canada Education Park evolved from that cooperative planning and lobbying. A partnership between several agencies including UFV, the RCMP, the Justice Institute of BC, and Canada Border Services, the park is now a reality that sees people from all the partners come to the location for educational purposes. UFV is the largest landowner on the Canada Education Park, at 85 acres. The campus is set in a beautiful natural setting adjacent to the Vedder River.