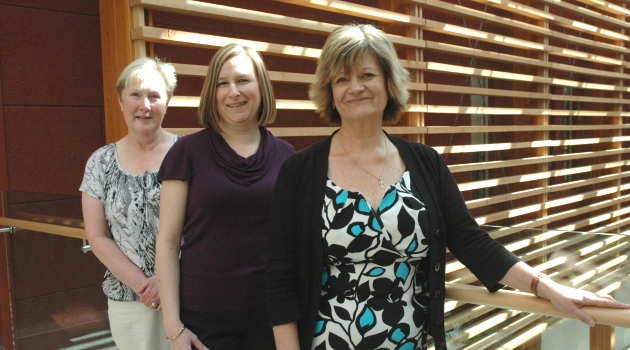 There is always some chaos involved when finishing up a big building and renovation project and moving people in, but amidst the chaos last week were some very pleased UFV employees. They were in good spirits because, despite the fact that months of work remains to get all faculty, staff, and students moved in and settled, one of UFV’s biggest and most complex projects ever is finally coming to fruition.

The UFV Campus Planning team, led by director Craig Toews, has been working for years to plan, design, and coordinate this huge undertaking.

Working from a master academic plan for the campus, Toews and project planning coordinator Shelley Young started by consulting with dozens of user groups to determine their space, material, and facilities needs as UFV planned to move the bulk of its Chilliwack campus across town to the new building.

Project procurement and furniture consultant Hilary Cooper then worked with those same user groups and countless suppliers to procure thousands of items for the new campus, everything from furniture to audio visual materials to intricate lab equipment .

Meanwhile, project manager Jorge Candia worked as a liaison with the contractor and the City of Chilliwack, seeking to ensure that all work complied with bylaws and building code and that UFV was achieving the best facility possible.  There are a lot of utilities and services to coordinate within a project this size.  Candia has been planning and coordinating the civil layout of the campus to ensure the projects lineup with the master plan and future infrastructure.

And long before the first moving truck pulled up, project assistant Colleen Heron was planning the logistics of a two-month staged move of more than 200 employees, and dozens of offices, labs, and classrooms.

“It’s really like a big giant jigsaw puzzle,” says Young. “There are so many details and pieces that have to fit together. And unlike some of our building projects on established campuses, we had to think about details such as parking, landscaping, warehousing, phone lines, IT connections, and many other details. And working with the departments was such a huge learning curve for us. The needs of areas such as chemistry, dental, nursing, agriculture, and the cafeteria are all so specialized.”

Cooper  thumps a giant document down on the table. “We call this our bible,” she says. “It covers every single item in every single room at the former campus and details where it’s coming from, and where it’s going to, at which time.”

She admits that you have to switch your mindset when doing institutional purchasing.

“It’s not like a home budget. You have to think in terms of spending in the millions of dollars without blinking.”

“It’s a huge relief to see it finally happening,” adds Heron. “We’ve been working intensely on it since 2010.”

This article originally appeared in a UFV on the Move supplement in the Chilliwack Progress.