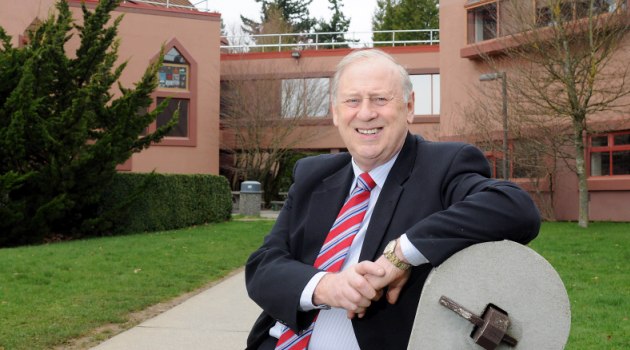 What’s even more remarkable about John Smith’s decision to chair the Friends of UCFV is that he was battling cancer at the time.
“It didn’t look good and I wasn’t sure if I’d last six months, but I decided to do what I could while I could.”
Seven years after making that decision, Smith was  a welcome visitor on the University of the Fraser Valley campus.

The term “UFV” slips off the tongue rather easily these days. But it is the third acronym used to describe the Fraser Valley’s post-secondary institution in its almost 40-year history.

The university-college model was a hybrid not well understood or well used outside of British Columbia. While the philosophy behind the model was sound — combining college and university programming in a comprehensive curriculum that included trades, upgrading, and applied programs as well as traditional academics — the ‘university college’ label was working against UFV and the four other university colleges.

It wasn’t understood well outside of BC, and was a bit of a handicap when marketing to international students, when faculty were trying to get published or invited to conferences, and when students applied to graduate and professional school, and when the development office approached donors.

That’s not to say what was then called UCFV didn’t have success in all those areas — it did — but it was felt that it would have more success if it could simplify and amplify its brand by becoming a university.

And… UCFV was being left behind again. In 2005 the province created Thompson Rivers University in Kamloops out of the University College of the Cariboo there, and created a UBC campus in Kelowna, eliminating the university college there.

That left just three university colleges in BC — the model was a dying breed and UCFV knew it had to adapt and become a university too.

Once again, it had to turn to our communities for support as it lobbied the provincial government for university status.

“Once we decided to campaign actively for university status, the community didn’t take any convincing,” notes retired executive director of community relations Bob Warick. “They were ready for our message, and ready to support us. We really got out there too. President Skip Bassford did 80 presentations on it one year. It was such a clear-cut case in our opinion, and we had such public support, that it was frustrating to go year after year with no change.”

Warick was presented with a challenge by Skip Bassford: work non-stop on achieving university status. He used all the contacts he’d made in his years in general community relations and fundraising to help build a network of support for the university concept.

And he turned for help to John Smith, a community leader who had contacts in both Abbotsford and Chilliwack and who had supported the earlier drive for university-college status in 1991. Smith, who later became a city councillor, worked as a banker in Chilliwack and sat on the school board in Abbotsford.

“Skip and Bob phoned me and said they needed help. They had a strong case for university status, especially considering what was happening in Kamloops and Kelowna, but they needed to show strong community support,” Smith recalls.

So, some friends of UCFV founded the Friends of UCFV — a community society formed to advocate for university status. Smith was the chair and Chilliwack lawyer David Sliman, who had been a Fraser Valley College student in its early days, was vice-chair.

“What was great about the community effort is that we were unstoppable. The provincial government could say no to the UCFV administration or apply pressure to them — but they couldn’t touch us or hurt us other than to deny our request. But even denying our request wouldn’t be sustainable. It became apparent that we wouldn’t give up. We got the whole community behind the effort and even if the entire UCFV management team had won the lottery and moved to the Caribbean, the community effort had such momentum that we would have carried on without them,” Smith recalls.

What the communities didn’t want was for the university college to be converted to a satellite campus of UBC, as had happened in the Okanagan, or of Simon Fraser.“That concept was certainly considered by the provincial government and floated to us,” Smith recalls. “But even though those universities would bring solid reputations with them, we felt very strongly that we did not want to be a branch plant of UBC or SFU. We wanted to be a true community university, carrying along on the path that UCFV was so successfully forging of being responsive to its communities. We wanted our own university with its distinct personality and programming.”

Nearly 900 people paid the $10 membership fee and took part in a concerted community lobbying effort that once again included ads, presentations to councils, clubs, and chambers, rallies, and a newspaper supplement. The Friends of UCFV had representation from all the regional communities, and lawyers and accountants donated their professional services.

But it was a slow process. The Friends formed in 2005 and Smith figured it would take a year to convince the government that the community was once again determined to have its way.

In 2006 the provincial government appointed a task force to look into post-secondary options, chaired by former cabinet minister Geoff Plant. He travelled the province, chairing sparsely attended meetings. When he got to Abbotsford’s Ramada inn on November 9, 2006, more than 700 people — more than had attended all the other meetings combined — were waiting for him, eager to speak of and cheer for their desire for a university in the Fraser Valley. Not a branch plant of UBC. Not a continuation of the university-college model. But an evolution of their community-focused post-secondary institution into its next stage — a community-focused university.

Speaker after speaker supported the name and status change concept, echoing the “it’s our time” theme.

In 2007 Plant’s report recommended the creation of special-purpose regional universities, which was seen as a victory for UCFV. But it took until April 21, 2008 for the green light. Premier Gordon Campbell came to the Envision Athletic Centre on the Abbotsford campus and proclaimed the University of the Fraser Valley into existence. (And then did the same at four other institutions over the next four days.)

A new era was born, one that was based on UCFV’s community roots and grew from community support.