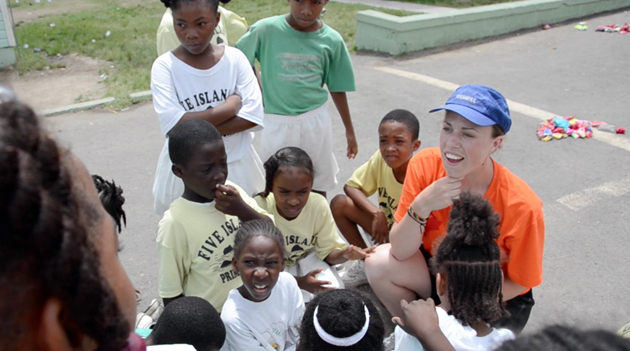 Building relationships, gaining confidence, and being humbled are just a few of the experiences had by a group of UFV students on a recent trip to Antigua with the Champions for Health Promoting Schools program.

In its seventh year, the project also reached new heights — from being commended by the Antiguan minister of education, to being interviewed on the local radio station, and creating a new exchange opportunity.

For the month of May, the Kinesiology students were working in schools across the Caribbean island, along with hosting the Unity Games — an event similar to a Canadian sport day. The focus of the trip was teaching life skills, such as teamwork and listening, through lessons and games.

Overall, the trip was a success, said Joanna Sheppard, a UFV instructor and creator of the Champions for Health program.

Not only did the Antiguan students benefits from the experience through personal growth  — from learning to share, and showing compassion to one another — but the UFV students did, too.

“They became more confident in themselves,” said Sheppard. “And they’ve realized they are part of a bigger world — that teaching can not only impact the Fraser Valley, and Canada, but also across the world.”

Twenty-three-year-old Alison Bricco of Abbotsford can attest to that. Remembering how she felt during her first week in Antigua, she was unsure of her abilities. But as time progressed, she felt like she was “coming out of her shell.”

“I started becoming more comfortable with my teaching abilities, and the interaction with the kids started to come so naturally,” said Bricco. “My expectation was that we would go to Antigua to help the kids and their teachers. I didn’t realize how big of an impact it would have on me overall.”

In addition to having breakthroughs with the students, the program itself also advanced with stronger collaboration efforts around the island.

Sheppard credits the progression to the strength and leadership of her students, which enabled her to push them professionally to teach more difficult concepts.

“We were able to demonstrate on a strong level what our UFV students are capable of, and what we can make happen on the island for years to come,” said Sheppard.

Volunteering at the local track and field meet, and the local tennis club helped the program connect with the community, as did adding two new schools.

Having a celebration dinner with the local teachers, speaking on the radio and TV about the program, and being invited to be a part of the Antiguan Community of Practices Organization (which looks at the best practices of teachers), are other major accomplishments of this year.

In addition, the program was honoured by the Antiguan minister of education.

The future of the program will see a teacher exchange, with four Antiguan teachers visiting UFV in April 2013 for the first time. Sheppard will also be working on a research project with the Antiguan ministry of education, in conjunction with the UNICEF Child Friendly Schools Initiative, run through the United Nations.

For an overview of the trips photos, videos and stories, visit the UFV Today blog at ufvtoday.ca/antigua