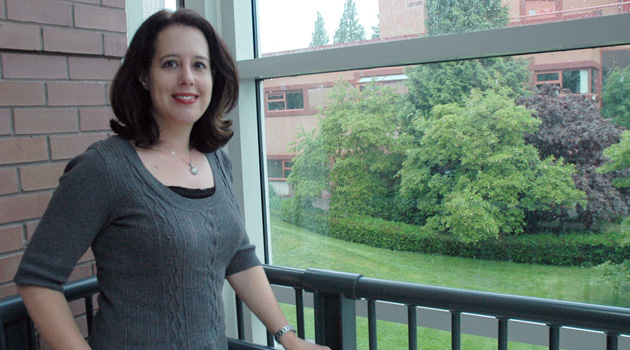 Donna Alary is the first to admit that it took longer than she expected to finish her master’s degree.

She started the Master of Arts in Criminal Justice with the first-ever group, or cohort, to enrol in the program at the University of the Fraser Valley in 2005. She completed the nine courses required with the rest of her cohort within the two-year time frame, but when it came to writing the major paper, “life,” as she puts it, “got in the way.”

Now, seven years later, she has finished the required paper, the capstone to the degree. She is graduating on Friday, June 15, and she’s at the top of the class, winning the Governor General’s gold medal for top academic performance at the master’s degree level, with an almost perfect 4.25 grade-point-average.

Like many people in the MA program, Alary is a mature student. She’s also employed by UFV. As someone who has monitored student retention rates as part of her work in enrolment management and institutional research, she knows all too well the barriers that mature students must overcome to succeed.

“Many students in their first few years of university still live at home, but graduate-level students are generally established and juggling family and work commitments,” she says. “It’s really easy for life to get in the way of your studies. And, near the end of my last term in the program, that’s what happened to me — new job and other personal challenges (both bad and good) prevented me from giving the necessary focus to my thesis paper. Something had to give, and the only thing that could in my case was school.”

But Alary knew she wouldn’t leave it forever. Working at UFV meant there were constant reminders of the unfinished business. She’d see criminal justice faculty members walking down the hall, and watch a new crop of MA students graduate each year. In the back of her mind she knew she’d return to her paper when the timing was right.

“As part of my job, I run and analyze the retention numbers. I see the ‘outliers’, those who don’t follow a straight path to completion. But in the end, many still graduate. I fell into that category.

“ The crim faculty members were all so supportive,” she recalls. “They recognize that we are all working professionals balancing many commitments, and they accepted that I was planning to complete eventually. When I was ready to refocus they were there to help me. They never gave up on me. They don’t just focus on students in the current cohort. They provide a continuum of support to all of us.”

Alary chose to focus on something very connected to her career when completing her master’s thesis. She looked at the academic performance of criminal justice majors at UFV as compared to non-crim majors.

“Criminal justice education is a field that is high in demand and really growing across North America. Despite this growth, there is a general perception that crim is not as rigorous a field of study as more traditional fields, and that it attracts students who may not do as well as those in other disciplines,” she says.

“My research found that in first-year courses, criminal justice majors did not perform as well as non-crim  majors, but by the time they reach fourth year and graduation, they are doing just as well as, or better than, others. It’s a testament to a very determined approach by the department to bring in students and really engage them, through a number of special courses and other initiatives. For instance, they have a mandatory course in study skills in first year. Student engagement is statistically one of the strongest predictors of student success, and the crim department has really taken that to heart. They’ve really taken UFV’s mandate to provide access to education, and embraced it.”

Although her research for this project was quantitative, Alary would like to continue to look into the reasons behind the success rates of UFV crim students.

“I want to do more research to look into the ‘whys’ now.”

Alary and the School of Criminology and Criminal Justice at UFV have a long history together.  She grew up in Mt. Lehman and lives in Abbotsford these days. She chose to major in crim soon after arriving at the university in 1994, and was among one of the first classes of bachelor’s degree grads from the program in 1999. She worked for the New Westminster police service as an analyst for three years, and then returned to UFV for a job in institutional research. She’s been with the university ever since, and even completed a six-year stint on the Alumni Association board.

As is the case with most mature students, she has a lot of people to thank for supporting her along the way. These include her parents Gina and Dan (to whom she dedicates her award), who never had the opportunity to pursue post-secondary but strongly encouraged their children to do so, her husband Jeremy Dace,  her faculty advisor Darryl Plecas and other members of the UFV crim department, and all of her friends and family.