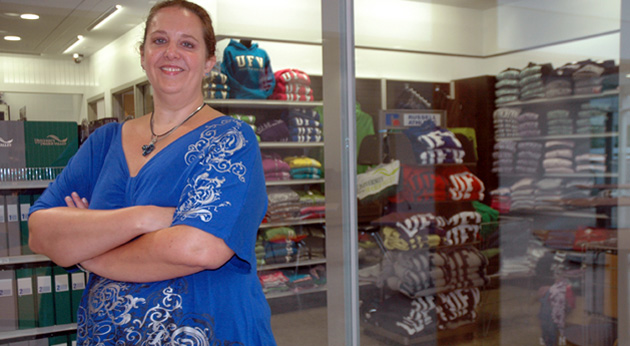 Sheryl MacMath stands outside the bookstore at the new CEP building. 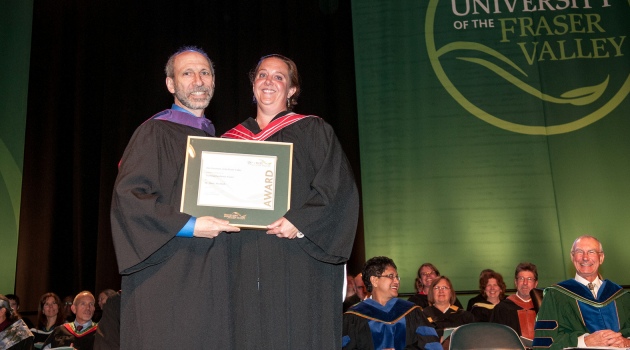 If you think “MacMath” is a fitting name for a teacher, you’d be right.

Dr. Sheryl MacMath is a faculty member of the Teacher Education program at UFV, and she is also the 2012 recipient of UFV’s Teaching Excellence award.

This annual award recognizes not only the classroom aspect of teaching, but the behind-the-scenes work that is easy to overlook. Professors spend countless hours compiling materials and constructing lesson plans both before and after lectures — not to mention the time they spend answering emails, holding office hours and keeping up with the latest developments in their field.

Nearly 30 recommendation letters accompany MacMath’s nomination, and it’s clear from the way her students talk about her that this is an area where she excels.

“From the moment you meet her, she makes sure she has a connection with you,” says Danielle Tebrinke, one of the two students who co-nominated MacMath for the award. “Even though you’re in a class of 36, you feel like you know her personally, and she knows you personally. That makes a huge difference. You always work harder for a teacher that you love, and that’s really what her class feels like. You put in the extra effort because she cares so much.”

MacMath herself was overwhelmed when she learned that her students had decided to nominate her.

“I cried,” she says with a laugh, “I’m the crier in the group. That was the kicker for me, that it was my students that nominated me. There’s nothing more important than my students, so that was really what mattered most to me.”

Students in the UFV Teacher Education program have already completed a four-year bachelor’s degree and take the one-year teaching certificate in order to qualify as elementary or middle school teachers. As such, they tend to be older and more mature than the typical undergraduate student and ready for more of a mentorship with their professors.

As a teacher-educator, MacMath has a different bond with her students than most professors; she doesn’t just teach, but helps them to become teachers themselves. This transformation can be a rocky one, and MacMath builds a support network for her students to make the transition as easy as possible. On the first day of classes, she hands out her home phone number in case they have any questions or crises, during the class or even during their careers. At Christmas, she sends each of her students a card. Her students attest to the countless hours MacMath spends reworking lesson plans and tailoring seminars to her individual classes.

MacMath says it’s all part of the job description.

“It’s important to me to do what I’m teaching them to do, to lead by example. It’s not about talking about it; it’s actually doing it in the classroom. Everything that I push them to be, I’m pushing myself as well.”

She rarely stands at a podium to lecture, instead walking among her students and leading smaller group activities.

Traditional methods of teaching aren’t always the most effective, she says, and there needs to be variety.

“To me, school is about more than handing something in and receiving a grade,” MacMath says. “It’s about both student and teacher working together, collaborating to find what works. We don’t want to create cookie-cutter teachers — we need to have teachers as unique as students.”

It’s only fitting that one of the easiest areas to explain this to her students is when it comes to math.

“There’s a very nasty cycle that can occur in today’s school system,” says MacMath. “Often, math is taught procedurally, very systematically. We don’t represent it as it appears in real life. Then when students go on to become teachers, they may not understand how to explain math except with those procedures, and when a student struggles with math, there may be no other way to explain it.

“My job is to break those cycles. If you can’t picture what something looks like in real life, it’s a useless concept for you.”
MacMath describes how she uses a workshop-style class with 13 different stations to explain fractions to her students, physically representing the work they are doing with math so they can visually see what the processes look like. At the end of the day, MacMath says, it’s like a light bulb goes on in her students’ heads.

“Students will come up to me after class and say, ‘Oh my goodness, I never understood fractions before,’” MacMath says with a laugh. “It’s the most rewarding experience.”

And after her students graduate and begin to teach students of their own, MacMath sees the effects of this system trickle into classrooms.

“Teachers really enable students to step forward,” she explains. “Working at a teacher-educator level, you can see that multiply. It’s an incredibly important responsibility.”

“I believe that each of us has an opportunity to change the world, to improve it,” she continues. “Teachers have a special responsibility. You empower students, teaching them that they have a role and that they can have a positive impact.”

Finally, MacMath says it’s her students that inspire her most of all.

“They have this incredible passion and dedication to improve the world,” she says. “It keeps you young, working with such enthusiasm and such heart. And having them nominate me for this award is the highest honour I could ever get.”
MacMath completed her PhD last year at the University of Toronto, with a focus on curriculum, teaching, and learning. She will be receiving her Teaching Excellence award at one of UFV’s Convocation ceremonies on Thursday, June 14, at the Abbotsford Sports and Entertainment Centre next to UFV’s Abbotsford campus.