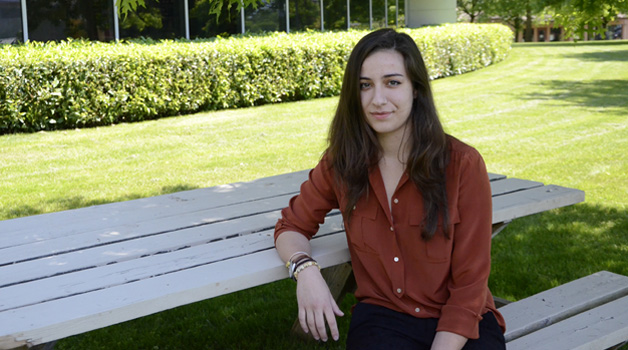 When Marina Parapini was told she had won the Governor General’s bronze medal at UFV, she had no idea what that meant.

A quick Google search soon told her that it meant she had the highest GPA amongst those completing a two-year diploma at UFV — something that was both an honour and a surprise.

“It was exciting, but completely unexpected,” says Parapini, who completed both her Business Administration diploma and Bachelor of Arts in English and business this year. “I finished most of the diploma a while ago,” she explains, “and just finished the last couple of credits this year.”

This medal is the culmination of a five year journey for Parapini, which didn’t always go as planned. She started at UFV with the intent to focus purely on business, but eventually switched to an English major with a business minor.

“I’ve always loved how different disciplines work together if you care to look for the connections,” she says. “It was that connection and that human aspect that drew me to English from business.”

Probably the highlight of her degree, Parapini says, was the chance to spend a year abroad — one semester in France and one in Italy. It’s an experience she recommends to every student at UFV.

“Now’s the time to travel if you’re going to do it,” she urges. “As we grow older, we’re not always going to have the chance to see more of the world and other cultures. And in a small university like ours, I feel more students could take advantage of the program than there are.”

The year abroad, she says, really helped her grow as a person in a couple of ways. Studying in Italy and learning to speak Italian really helped her connect with her roots, since that’s where her father grew up and Italian is his first language. But, as Parapini says, seeing the world from the other side of the ocean really drew a lot of business principles into focus.

“It really clarified the cross-cultural aspects of business,” she explains. “There are a lot of differences that you don’t understand until you get out of the valley.”

And it made living in the valley again that much sweeter for Parapini, who hails from Dewdney outside of Mission.

“About halfway through my degree, I was pretty convinced I never wanted to go to school again,” Parapini says with a laugh. “It sucks, being half-finished and half-unfinished.  I actually left for Europe when I was feeling the most disillusioned, and I came back feeling totally recharged.”

“We live in such a beautiful area,” she adds, “and travelling really hammered that home for me.”

Other than the opportunity to travel abroad, Parapini says that she’ll always cherish the relationship she built with many of her professors. With such small class sizes, there were several moments where professors were able to take her aside and help her along.

“English professor Trevor Carolan took me aside and gave me some books to review for the Pacific Rim Review of Books, which was a really great opportunity,” she says, “and I have to add a thanks to Don Miskiman, one of the human resources professors, who let me beg into his full class to finish my minor. We’re lucky at UFV to have so many awesome professors!”

And despite the fact that she’s officially completed both BA and diploma after five long years, Parapini doesn’t plan to stop attending university. After taking a chemistry class to complete her lab science credit, Parapini was fascinated and took another. And another.

“I feel like a little kid again,” she says with a grin, “like I’m rediscovering the world.”

She’s currently completing a chemistry course at UFV over the summer, and then she’ll be off to UBC in the fall, where she’s been accepted into the Bachelor of Science program.

“Earning this medal was a really good ending note for me,” Parapini says, “and while I’ll always love UFV, I think now that I’ve finished my degree, I’m ready for a change. I want to live in the city for a while.”

Eventually Parapini sees herself working in the health industry or with an organization like Doctors Without Borders, as a combination of all her passions. She stresses the importance trying classes outside of her major had on her academic path, and recommends all UFV students to do the same.

“I probably wouldn’t have touched the business program if I’d gone straight into English,” she confesses, “but it’s been beyond helpful to see the connections that can be drawn between disciplines. Every student should take classes outside their major and their narrow interests, because everything works together.”

Marina Parapini will receive the Governor General’s bronze medal (as well as her BA and diploma) at UFV’s Convocation ceremonies at the Abbotsford Sports and Entertainment Centre on June 15.