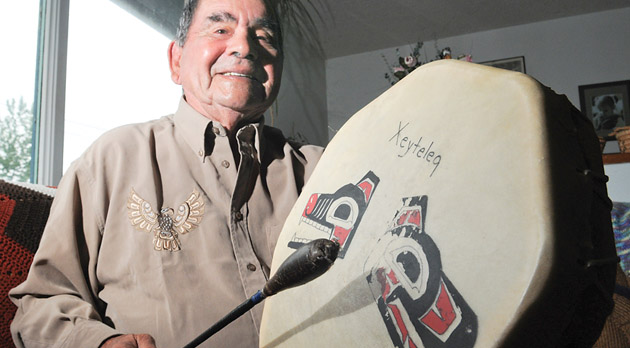 Ray Silver Sr. has come to value formal education, despite the horrendous experiences he had in residential school. Photo: courtesy of Abbotsford News 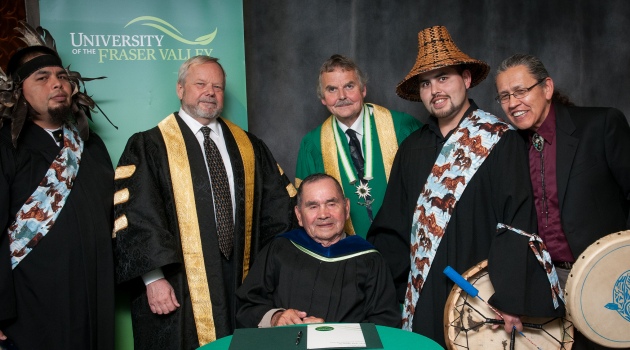 Although he didn’t attend school past the age of 12, Ray Silver Sr. has accumulated a lifetime’s worth of knowledge and wisdom that he has shared with younger generations.

For his service and leadership in his community, the University of the Fraser Valley is recognizing Silver with an honorary Doctor of Laws degree at its Convocation ceremonies this year. Silver will receive his degree at the 2:30 pm ceremony on Thurs, June 14 at the Abbotsford Entertainment and Sports Centre. The ceremony is open to the public and free.

Silver didn’t have much time or respect for formal education for most of his adult life.

The Sto:lo elder had a terrible experience with residential school, first at Coqualeetza  and then in Port Alberni. His younger brother died at the second school, and Silver returned home on a ferry with his brother in a coffin below decks.

Like many of his generation, he was separated for crucial childhood years from his family, never learned his native Halq’eméylem language, and lost touch with much of his culture.

He quit school at 12, and started a long career with the Clayburn brickmaking plant soon after.

He always worked, making money at the plant and rising through the ranks to a leadership position, and hunting, fishing, and trapping. But Silver was also, in his words, a “slave to alcohol” until he was 41. Now 83 years old, he will have a “birthday” party on June 13 to celebrate 42 years of sobriety.

Once he got sober, he turned to being a real leader in his community.

“I had 11 kids and I supported them, and loved them lots, but I wasn’t a great father to them when I was younger because of my drinking problem. I guess I became ‘me’ when I quit drinking.”

That’s when he started looking outward, and working with the youth in his community, running a boxing club for many years as a way of encouraging physical health, self-discipline, and sobriety. He helped raise his own children and a dozen others, and encouraged youth to stay connected to their culture.

“After the experience we had at residential school, I made sure I kept them all at home and put them in public school, but I didn’t a lot of emphasis on education because I’d had such a bad time with it. I didn’t push my children to work very hard at school because I was afraid of it,” he says. “I’m sorry about that today. Today a lot of our grandchildren and great-grandchildren have done very well at school. I’m encouraging my children and everybody else’s to go to school. It’s one of the most important things you can do in life today.”

While he didn’t get much formal schooling, Silver taught himself to read and write later in life, and also considers himself a student of Mother Earth.

“My education came from Mother Earth. We have to love what little of her we have left and learn to respect her, and also our waterways, which are the blood vessels of the earth.”

He was instrumental in bringing the longhouse and the traditions associated with it back to the Sumas (Se:math) First Nation.

Silver’s life has been the subject of a documentary film that is archived at Tretheway House in Abbotsford. He was nominated as one of the 20 Faces of Abbotsford in 2008, and his face was casted and displayed at the

He and his wife Millie continue to be strong proponents of aboriginal culture and very involved in their community. Last year, they organized the 35th annual Elders Gathering for aboriginal elders that attracted 5,000 people to Tradex in Abbotsford.  They also run a youth dance group.

Those dancers will be dancing for their grandfather this weekend in the longhouse as they honor Ray Silver Sr. on the occasion of his honorary degree.

2 Responses to Ray Silver Sr. to receive honorary degree for his leadership in Sto:lo community