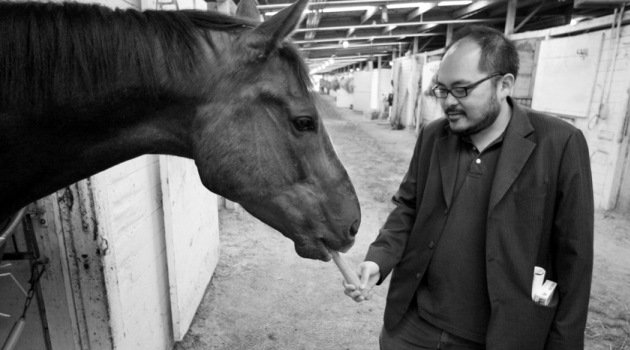 Kevin Chong is one of two Vancouver artists who will read at this year's Literary Café.e.

The Harrison Festival of the Arts has been part of the Fraser Valley’s cultural landscape for 33 years, and the University of the Fraser Valley has been involved from the beginning. The popular annual summer festival is back this year from July 7 to 15, and UFV is contributing two exciting elements: the Literary Café and two shows from this year’s Directors’ Festival.

UFV annually presents several shows from its Directors’ Festival, but there’s another strong partnership in the Literary Café, which is co-sponsored every year by UFV’s Continuing Studies department.

“The idea was to try and include some literary arts in the festival,” says Phyllis Stenson, executive and artistic director for the festival. “We already had elements of dance, art, theatre, and music, and we thought that it was important to include a literary aspect as well. It turned into a café-style evening mixing local writers with music.”

This year, Literary Café has a theme of Heartbreak and Humour, and presents authors Kevin Chong and Alex Leslie as well as guitarist John Gilliat. All three hail from Vancouver, a local aspect that has always been important to Literary Café organizers.

“This year we’re really looking forward to having two fairly local authors from Vancouver,” says Cheryl Isaac, UFV Continuing Studies director, who is also master of ceremonies at the café. “The festival has a definite grassroots feel in terms of the music and the crafts, and that’s really what we aim for — keeping it local. At UFV Continuing Studies, we’re all about the community we serve, so this is just a part of that partnership.”

Both Isaac and Stenson are excited about this years’ offering.

“I’m a big reader, and Cheryl’s a big reader,” Stenson explains, “so it’s in the back of our minds all year that we have to pick some writers for this event.”

“This year we’re excited for both of our authors. Kevin Chong was part of Literary Café years and years ago with his first novel, so it’s a pleasure to have him back. Not all writers are necessarily good at public readings, but he’s wonderful to listen to.”

Chong has released two books in the last year: a novel, Beauty Plus Pity, as well as a nonfiction work entitled My Year of the Racehorse.

“I remember the first time I read at Literary Café, I was really surprised at how enthusiastic the people at Harrison are about the authors they get out every year. I couldn’t wait to come back.”

“This year I’m still really in the rush of having two books out,” Chong continues. “I’m leaning towards reading from the horse book, but I might read from both. Beauty Plus Pity definitely has aspects of both heartbreak and humour, but I think I like how My Year of the Racehorse fits in with it, a little unexpectedly. There’s humour at the racetrack in the general spirit of the place, the interactions between everyone there, but there’s also heartbreak — like when a horse gets injured, or when you lose money on a bet. It’s kind of interesting how that would tie in.”

Chong is currently working on his fifth book and is becoming fairly well-known; he was recently featured on the cover of BC Bookworld for My Year of the Racehorse.

“We’re really excited to have Kevin back,” Stenson says, “and we also like to support emerging authors and artists, so we’re also excited to have Alex Leslie on board. It seems like her work will make a good combination with Kevin Chong.”

The final piece of the puzzle? The music of John Gilliat, which Stenson and Isaac agree will bind the evening together as a whole.

“He’s got a sort of nouveau gypsy style, which just seems so appropriate,” Stenson explains. “It’s just the perfect music to make it a cohesive evening.”

This year Literary Café also includes a talk-back element with the authors after the readings, and the audience will have a chance to talk to Chong and Leslie about their work. Adding this element should help boost attendance, Stenson says, as readers are naturally curious.

“People always wonder where the ideas came from and how the authors put things together,” Stenson notes. “There’s always been a chance to go up and talk to the writers after the reading, but now we’re formally setting aside time for that to happen, which should help things along and give it a little more structure.”

Altogether, Stenson and Isaac expect an audience between 75 and 150 to make it out the event.

“It’s not a huge audience, but it’s a committed one,” Stenson says. “It’s always a lot of fun to come out and hear the authors speak and the musicians play. It’s just such a relaxed atmosphere. It’s a wonderful addition to the festival, and it’s a partnership with UFV that’s very dear to my heart.”