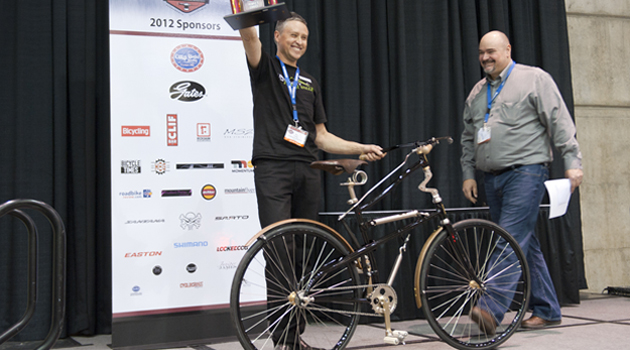 Once you’ve engineered a bike that changed the face of mountain biking in Canada, managed a successful bike manufacturing company, and been inducted into the Mountain Bike Hall of Fame, what’s left to do?

As founder of Brodie Bikes and innovator of the first ‘sloping-top tube-frame’ mountain bike, the guy is a Canadian legend to cycling enthusiasts. So, after designing, engineering, and building bikes and then leading the way in Canadian bike design for decades, it was time for something new.

Next on the list? Rebuild a bike that was first built more than 100 years ago — before carbon fibre, titanium, aluminum, and most other materials used to manufacture today’s bikes were even dreamt about.

Two years ago, Brodie, who teaches  a bike-frame¬building courses at the University of the Fraser Valley, came across a sketch of an 1888 Whippet bicycle. First, it raised his curiosity. Then it inspired him. Finally it became a full-time hobby as he raced through the winter evenings to finish the Whippet.

“When I saw a photo of the bike, it really caught my eye. It was something really special for its time, especially in regards to its full suspension.”

The Whippet was manufactured in England from 1885 to 1888 and one was of the first bikes with any form of suspension — a revolutionary idea to make the ride smoother for the cyclist. Although the tires were solid rubber, there was a spring-formed seat, and a unique rigid system that connected the seat, handles, and pedals all in an effort to keep them from moving independently while being ridden.

It was project to tinker with, just something to do in his spare time. During the day, Brodie teaches his Bike Frame 101 course at the UFV aerospace centre at Abbotsford Airport. In between teaching his students he would take a few minutes to work on the Whippet. But when UFV’s Trades and Technology director Rolf Arnold heard about the bike, he too became curious.

“As soon as Rolf saw it, he was interested. Then he suggested UFV could sponsor the project,” adds Brodie.
And with that, came the deadline. The 2012 North American Handmade Bicycle Show was taking place in California in March. UFV administrators figured it would be a great marketing tool for Brodie’s course if they entered his Whippet in the prestigious exhibition.

With a looming deadline, the project took on a life of its own and Brodie admits to many exhausting 14-hour days working on the Whippet.

“The time I spent on it after December can’t be measured in hours, but in days,” he jokes. “It was pretty much solid, full- time work for the three months before the show.”

This was no kit bike. When you build a bike by hand, especially an historic replica, you really do build it by hand. There were many hours spent with jigs and lathes making parts for the bike. A masterpiece of engineering in its time, the Whippet was made out of brass, stainless steel, bronze, leather, and wood — Brodie found a walnut tree that was harvested in Oregon for his pedals. The hub was machined from a solid block of bronze, and then holes for each spoke were tapped into the hub.

Just a week before the show, the bike, which weighs almost 50 pounds, was painted and fully assembled. The Whippet was entered in the North American Handmade Bicycle Show’s people’s choice category and won first prize.

And while Brodie has been to dozens of bike shows, it seems he and the Whippet stole the show at the American event.

“I wasn’t sure what was going to happen. After all that work, I looked at the bike and thought ‘is that all there is? What are people going to think about this?’” he recalls. “It captured the public’s imagination, I guess.  I’ve never been interviewed by so many people in my life and there were so many photo-shoots I had to attend. We really seemed to be a hit down there.”

Karen Massier, UFV Trades and Technology’s partnership and continuing education coordinator, says sponsoring the Whippet for the North American Handmade Bicycle Show was an excellent opportunity to market Brodie’s unique bike-frame–building program — the only one of its kind in Canada.

“The bike show is the largest in North America and bike frame enthusiasts attend from Europe, Asia, and of course North America as exhibitors and spectators,” she says. “I was at the three-day show and I can tell you we were the most popular booth there and we must have talked to all the 8,000 attendees.”

Massier agrees that Brodie became a media darling at the event and later was highlighted on CBC and in several trade magazines. The Whippet was a show stopper and Massier was thrilled that UFV supported Brodie in this project.

“We were hounded by the media at the show,” she adds. “We are very proud to have Paul as our instructor as it is clear that he is a leader in the field of bike building.”

And now that the dust has settled, where is the Whippet these days? Brodie laughs. The painstakingly restored beauty is currently being stored in his spare bedroom.

“When I first started this project, I just wanted to make it look cool. It looks like a bike that is not super expensive and I was just going to ride it around. But to be honest, it’s too perfect to ride. It’s a museum piece and a bike as special as this, just doesn’t get ridden.”

UFV’s bike-frame–building course will continue to run throughout the summer with a program starting in mid-June and one in late July. The August session is already fully booked. To find our more information about the course, visit www.ufv.ca/bicycleframe or contact Karen Massier at UFV at 604-847-5471 or email karen.massier@ufv.ca .

The program is holding an open house on Tuesday, June 5, at the UFV Aerospace Centre at 30645 Firecat Ave at the Abbotsford Airport. Bring a hard-tail frame if you like and Paul Brodie will check its alignment. Call 604-847-5471 for more information.
-30-