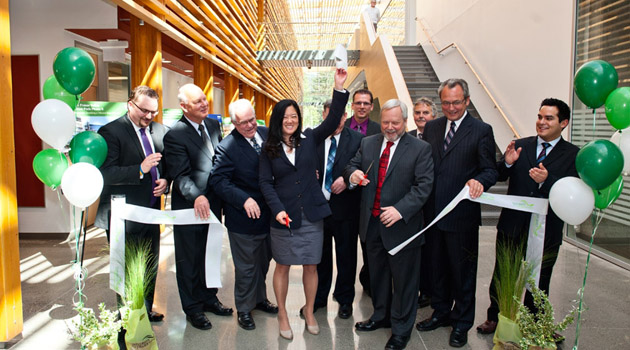 The University of the Fraser Valley celebrated the latest phase in its development at the Canada Education Park in Chilliwack on Friday, May 11, by opening a new building.

The building, a combination of new construction and extreme renovation, will house most of the programs and services previously located at the Chilliwack Yale Road campus.  It joins the UFV Trades and Technology Centre, which has been located at the Canada Education Park since 2007. The new building at Canada Education Park is a 150,000 square-foot facility. A large new inside structure was constructed in the outdoor courtyard of the previous military engineering school building, integrating the renovated sections into one cohesive facility.

While the building will be home to a variety of programs and courses, it will have a health and wellness theme. It is the home of the new Faculty of Health Sciences, including nursing, dental, health care assistant, and the new addition of the kinesiology and physical education program.

UFV will also offer courses in many other programs at the Chilliwack CEP campus, including two years of general arts and one of sciences, and offerings in social services, business, criminal justice, early childhood education, and upgrading, to name a few.  The agriculture program is slated to move to a separate renovated building on the new campus this summer. While theatre courses will be offered in several locations, UFV’s performance theatre will remain on the Yale Road campus for the near future.

Services offered at the new location will include the library, student services, admissions and records, disability services, aboriginal access, student society, and student life. Of special note is an aboriginal gathering place, which was built with special funding from the provincial government.

The new building is a major achievement for UFV after 15 years of dreaming and planning on the part of the university. When the federal government closed the former CFB Chilliwack in 1997, university and city planners both saw the potential for an educational focus for the property. The Canada Education Park evolved from that cooperative planning and lobbying. A partnership between several agencies including UFV, the RCMP, the Justice Institute of BC, and Canada Border Services, the park is now a reality that sees people from all the partners come to the location for educational purposes. UFV is the largest landowner on the Canada Education Park, at 85 acres. The campus is set in a beautiful natural setting adjacent to the Vedder River.

“I’m honoured and delighted to be opening the second major building on our new campus at the Canada Education Park,” said UFV president Mark Evered.  “This is the fulfillment of the dreams of our predecessors and colleagues at UFV and our many supporters in the Chilliwack region. It marks the beginning of a new phase in our development, but one that remains true to our commitment to both quality education and community advancement.”

BC Advanced Education Minister Naomi Yamamoto attended the opening ceremony and congratulated the university on its latest development.

“The University of the Fraser Valley is an important member of this community. Now that the latest phase of the new campus is open, students who choose to study here can feel good knowing they are able to access quality training and obtain in-demand job skills, which is an essential part of B.C.’s Jobs Plan,” said Naomi Yamamoto.

Chilliwack MLA John Les has been involved in lobbying for and planning the development of the Canada Education Park since he was mayor of Chilliwack in the 1990s.

“I am pleased to help celebrate the opening of the latest phase of UFV’s new Chilliwack campus. These new facilities will allow thousands of students to access training programs that will give them the skills they need to build their careers, right here in the Fraser Valley,” said Les.

The project was built at a cost of $41 million, with an additional $4 million going towards campus transportation and infrastructure development.  It is built to LEED Gold certification, which means it meets the highest sustainability standards, and follows the Wood First initiative, showcasing BC wood in its design.

The B.C. provincial government provided UFV with $7.5 million in funding for acquisition of the 84-acre Chilliwack Canadian Forces Base site, $600,000 for the aboriginal gathering place, $10 million towards the major expansion and renovations of the new building at Canada Education Park campus, as well as $21.6 million to fund the major renovation of Building 1040, creating the new Trades and Technology Centre at the Chilliwack campus. A federal/provincial Knowledge and Infrastructure Program grant provided $7.22 million for infrastructure improvements. The remainder has been funded by UFV through its capital plan, which includes the future sale of the UFV Chilliwack North campus on Yale Road contributing to covering the cost of the development.

The new campus (including the current Trades and Technology Centre) will immediately provide space for 1,600 full-time equivalent spaces (400 at the TTC and 1,200 in the new building). The new building has the capacity to accommodate growth of 300 FTE to a total of 1,500, for a total of 1,900 FTE at the Canada Education Park campus.

UFV’s 30-year plan for the campus involves a dozen more buildings in this area to form a quadrangle design, for a 7,000 FTE count. This would use roughly half of the 85 acres UFV owns.